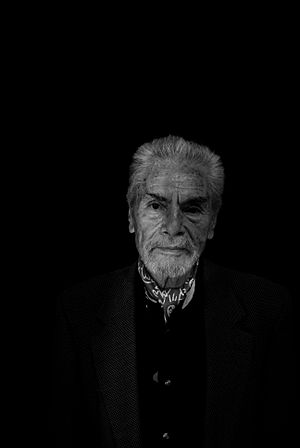 Adolfo Mexiac (August 7, 1927 – October 13, 2019) was a Mexican graphic artist. He was known for his politically and socially themed work, especially with the Taller de Gráfica Popular. He also painted several murals, the most important of which deals with the history of human law at the University of Colima.

In 2011, a “national homage” was held for the artist at the Museo de la Estampa in Mexico City. He was born in Cuto de la Esperanza, Michoacán.

All content from Kiddle encyclopedia articles (including the article images and facts) can be freely used under Attribution-ShareAlike license, unless stated otherwise. Cite this article:
Adolfo Mexiac Facts for Kids. Kiddle Encyclopedia.