The Afon Clarach (English: River Clarach) is a small river discharging into Cardigan Bay north of Aberystwyth. It flows through a largely agricultural and forested landscape except in its lowest reaches where its banks are crowded with holiday developments. The Clarach is formed at the confluence of the Afon Stewi and Nant Seilo at Penrhyncoch, with both their headwaters originating in low hills at the edge of the Plynlimon range. The course of the river takes it past the Institute of Biological, Environmental and Rural Sciences (a part of Aberystwyth University), and the village of Bow Street. Between Bow Street and Llangorwen, the river is joined by the Bow Street Brook.

In past centuries, the upper reaches of the river have been affected by lead and silver mining and the quality of the river has suffered as a result. There is some organic pollution from diffuse agricultural inputs and from the discharge of treated sewage from the Bow Street sewage treatment works.

The river discharges into the sea over the beach at Clarach Bay thus limiting the population of migratory fish able to access the river. Consequently, Atlantic salmon and sea-trout are rare, however brown trout, brook lampreys, millers thumb and stone loach are commonly found.

The picture below shows a Bridge over the Afon Clarach at Clarach Bay, where the river meets the sea. 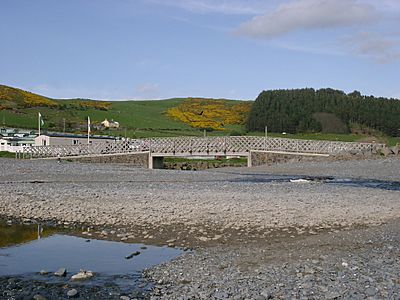 All content from Kiddle encyclopedia articles (including the article images and facts) can be freely used under Attribution-ShareAlike license, unless stated otherwise. Cite this article:
Afon Clarach Facts for Kids. Kiddle Encyclopedia.