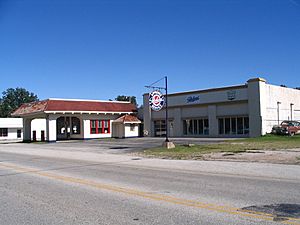 Afton is a town in southwest Ottawa County, Oklahoma, United States. The population was 1,049 as of the 2010 census, with population growth stemming from the near abandonment of nearby towns of Cardin and Picher because of ground contamination sites by local mining quarries. The town may have been named for the Scottish River Afton.

Afton developed in this part of the Cherokee Nation in Indian Territory after the Atlantic and Pacific Railroad Company (later the St. Louis and San Francisco Railway, or Frisco) built tracks through the area to Vinita in 1871. Oklahoma historian George Shirk asserts that a Scottish railroad surveyor, Anton Aires, named the town Afton after his daughter. Others have claimed the name comes from Robert Burns's poem, "Flow Gently Sweet Afton." Both Afton Aires' name and the Burns's poem honor the Afton River in Scotland.

A post office was established in Afton during 1886. In 1901, the Kansas City, Fort Scott and Memphis Railroad, which soon became part of the Frisco system, constructed another line through the town, creating a shorter route to Kansas City. The town became a Frisco division point and shipping center.

According to the United States Census Bureau, the town has a total area of 1.6 square miles (4.1 km2), all of it land.

The Afton Station Packard Museum is housed in a former D-X filling station, built in 1937 and restored in 1999 to house Packard and U.S. Route 66 memorabilia.

There were 441 households, out of which 33.3% had children under the age of 18 living with them, 51.9% were married couples living together, 10.9% had a female householder with no husband present, and 31.5% were non-families. 29.7% of all households were made up of individuals, and 15.6% had someone living alone who was 65 years of age or older. The average household size was 2.54 and the average family size was 3.11.

Afton is served by the Afton Independent School District.

In 2017, the Afton High School Football team won the Class A State Trophy for the first time in school history.

Afton sits at the junction of one Interstate Highway and three US Highways. A fourth US Highway previously ran through the area.

Burlington Northern & Santa Fe (BNSF) runs through Afton on the town's north side as it roughly parallels 1st Street. Afton has two major subdivisions that operate through the town. The BNSF Cherokee Subdivision begins in Springfield, Missouri and ends at the BNSF Cherokee Yard in the city of Tulsa, Oklahoma. The BNSF Afton Subdivision begins at the wye to the northeast of town and runs north to just south of Fort Scott, Kansas, where it merges with, and becomes, the BNSF Fort Scott Subdivision into Kansas City, Missouri.

All content from Kiddle encyclopedia articles (including the article images and facts) can be freely used under Attribution-ShareAlike license, unless stated otherwise. Cite this article:
Afton, Oklahoma Facts for Kids. Kiddle Encyclopedia.