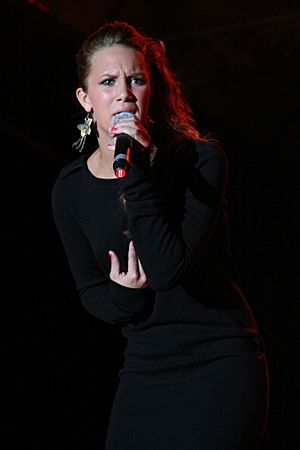 Agnes Carlsson (born March 6 1988 in Vänersborg), (better known by her stage name Agnes) is a Swedish singer who rose to popularity after winning Idol 2005, the Swedish version of Pop Idol, shown by TV4. The October 10th 2006 SVT confirmed that Agnes would participate in the Swedish Melodifestivalen 2007 with her song "More than a girl", but she got disqualified because she talked about the song in an interview with Aftonbladet. She is the third only Idol winner who was previously a Wildcard on the show, next to Canada's Ryan Malcolm and Kazakhstan's Almas Kishkenbayev. Agnes advanced to the finals as the jury's choice. She has released a song called "Release Me", which became a huge hit for Agnes.

All content from Kiddle encyclopedia articles (including the article images and facts) can be freely used under Attribution-ShareAlike license, unless stated otherwise. Cite this article:
Agnes Carlsson Facts for Kids. Kiddle Encyclopedia.