Akpatok Island is one of the uninhabited Canadian Arctic islands in the Qikiqtaaluk Region of Nunavut, Canada. It is the largest island in Ungava Bay on the northern coast of Quebec. The island is named for the Akpat, the thick-billed murre (Uria lomvia), which live on ledges along the limestone cliffs surrounding the island. 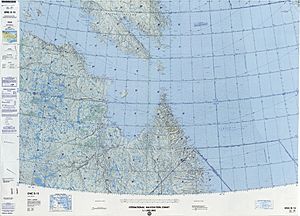 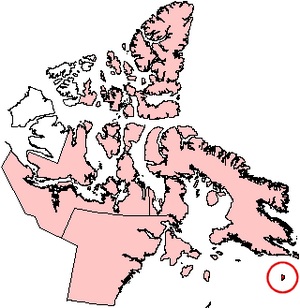 Polar bear, seal, and walrus are common in the area.

At the southern end of the island there are remains of a Dorset settlement. The island is known for its widespread cannibalism which ended around 1900 as the inhabitants moved to the mainland. Skulls and human remains have been reported on the island, but the accuracy of these reports can be called into question as there is an abundance of mystery and legend surrounding the details of the island. In July 1971 an exploratory oil well was drilled on the island, yet all that remains are a few dilapidated shelters and rusted equipment.

All content from Kiddle encyclopedia articles (including the article images and facts) can be freely used under Attribution-ShareAlike license, unless stated otherwise. Cite this article:
Akpatok Island Facts for Kids. Kiddle Encyclopedia.