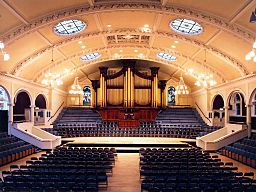 The Great Hall at the Albert Hall Nottingham 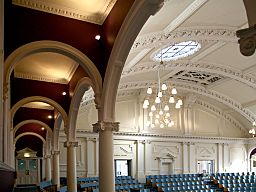 The Great Hall at the Albert Hall Nottingham

The Albert Hall is a conference and concert venue situated close to the centre of the city of Nottingham in England.

The original Albert Hall was started in 1873 as a Nottingham Temperance Hall. Watson Fothergill, a local architect won the commission. On completion the building cost around £15,000 (equivalent to £952,590 in 2018),2018. It was the largest concert hall in Nottingham and a major venue for political rallies but it had frequent financial crises. It was put on the market in 1901 and was bought by a syndicate of local businessmen for £8,450 (equivalent to £657,690 in 2018),2018, opening as a Wesleyan Methodist mission in September 1902.

Although the outstanding debt was a millstone, the work of the mission went from strength to strength until 22 April 1906, when fire swept through the building. The Methodists then realised that the Hall was under-insured. This time, a prominent local Methodist, Albert Edward Lambert, who had been responsible for Nottingham Midland Station was asked to produce a plan. His new Albert Hall Methodist Mission was built in the style of an Edwardian Theatre or Music Hall and, in the practice of temperance halls, concerts and other events were staged in the building.

The new Hall was dedicated in March 1909 and officially opened on 15 September 1910 by Lady Florence Boot, wife of Jesse Boot of the Boots pharmacy chain.

The Hall continued to be used as a Methodist mission and remained the city's largest concert venue until 1982. The congregation then merged with that at Parliament Street Methodist Church.

Nottingham City Council purchased the Albert Hall in 1987 and a major refurbishment was undertaken. A new floor was inserted at the level of the front of the circle to reduce the volume of the main hall, and thus created a new separate ground floor hall. The building was linked with the adjacent Nottingham Playhouse and the bar block of the theatre was updated at the same time to allow the creation of a multipurpose centre. The work was completed in 1988 and Her Royal Highness Diana, Princess of Wales unveiled a plaque on 23 February 1989 to commemorate the refurbishment.

Since July 1990 the hall has been commercially run by The Albert Hall Nottingham Ltd. and is used as a conference, banqueting and entertainment venue. The venue comprises the Great Hall and a further 10 conference rooms of varying sizes. The venue attracts a wide variety of local and national conferences, whilst continuing to serve many local orchestras, schools, and voluntary organisations.

The organ was built in the Albert Hall Methodist Mission by J.J. Binns in 1909. It cost £4,500 (equivalent to £336,175 in 2018),2018 and was a gift to the City of Nottingham by Jesse Boot, 1st Baron Trent to be known as the City Organ. The Italian and Spanish walnut casework was made in the Boots shopfitting workshop in Nottingham and the carving executed by Fitchett & Woollacott.

A full restoration of the organ by Harrison & Harrison under the direction of organ consultant David Butterworth was completed in 1993. The restoration was inspired and financed by the "Binns Organ Company", a local group formed for that purpose.

The organ has been awarded a Grade 1 listing by the British Institute of Organ Studies. The Grade 1 listing is for an organ of outstanding historic and musical importance in essentially original condition.

All content from Kiddle encyclopedia articles (including the article images and facts) can be freely used under Attribution-ShareAlike license, unless stated otherwise. Cite this article:
Albert Hall, Nottingham Facts for Kids. Kiddle Encyclopedia.