Nontsikelelo Albertina Sisulu (21 October 1918 – 2 June 2011) was a South African anti-apartheid activist, and the wife of fellow activist Walter Sisulu (1912–2003). She was affectionately known as Ma Sisulu throughout her lifetime by the South African public. In 2004 she was voted 57th in the SABC3's Great South Africans. She died on 2 June 2011 in her home in Linden, Johannesburg, South Africa, aged 92. 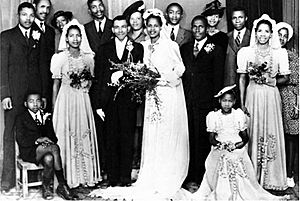 All content from Kiddle encyclopedia articles (including the article images and facts) can be freely used under Attribution-ShareAlike license, unless stated otherwise. Cite this article:
Albertina Sisulu Facts for Kids. Kiddle Encyclopedia.