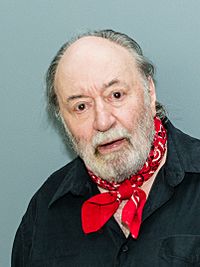 Aldo Tambellini (29 April 1930 – 12 November 2020) was an Italian-American artist. He was known for his works on electronic intermedia. He was a painter, sculptor, and poet. Most of his works were known as avant-garde. Tambellini was born in Syracuse, New York.

Tambellini died on 12 November 2020 at a hospital in Cambridge, Massachusetts from surgery-related problems, aged 90.

All content from Kiddle encyclopedia articles (including the article images and facts) can be freely used under Attribution-ShareAlike license, unless stated otherwise. Cite this article:
Aldo Tambellini Facts for Kids. Kiddle Encyclopedia.