He began his theological studies in Kaunas and continued in Innsbruck, Austria. However, he decided not to become a priest and moved to the Institute of Agricultural Sciences in University of Halle. He graduated in 1913 and returned to Lithuania. There he started to work as a farmer. He published many articles on agronomy in Lithuanian press. In 1918 he started to publish journals Ūkininkas ("Farmer") and Ūkininko kalendorius ("Farmer's Calendar").

During World War I he moved to Vilnius. He was one of the founders of the Lithuanian Christian Democratic Party and the head of its Central Committee in 1917. He signed the memorandum for the president Woodrow Wilson, addressing the question of the recognition of the Lithuanian statehood by the United States. Contrary to Smetona's views, Stulginskis was oriented towards the Entente. He was one of co-organizers of the Vilnius Conference. After, he was elected to the Council of Lithuania.

On February 16, 1918, he signed the Act of Independence of Lithuania. He was an advocate of the democratic republic as the form of the Lithuanian state. Thus, he strongly opposed the idea of monarchy (actually, Mindaugas II was the King of Lithuania from 11 July to 2 November 1918). In independent Lithuania Stulginskis was in charge of organizing the national army to defend the country against the aggressions of Bolsheviks and Poles.

He withdrew from politics in 1927, and worked on his farm. In 1941 Stulginskis and his wife were arrested by the Soviet NKVD and deported to a gulag in the Krasnoyarsk region, while his wife was deported to the Komi area. After World War II in 1952 he was officially sentenced by the Soviet authorities to 25 years in prison for his anti-socialist and clerical policies in pre-war Lithuania.

Released after Joseph Stalin's death in 1956, he was allowed to emigrate, yet he refused and returned to Lithuanian SSR. Stulginskis settled in Kaunas, where he died on September 22, 1969, aged 84, the last of the Signatories of the Act of Independence of Lithuania. 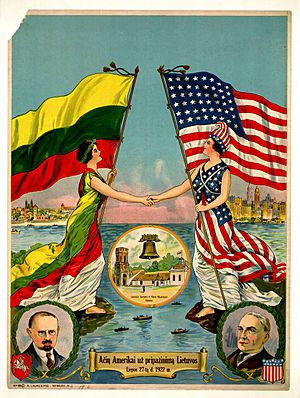 All content from Kiddle encyclopedia articles (including the article images and facts) can be freely used under Attribution-ShareAlike license, unless stated otherwise. Cite this article:
Aleksandras Stulginskis Facts for Kids. Kiddle Encyclopedia.