Kids Encyclopedia Facts
In this article, the patronymic is Sergeyevich and the family name is Ionov.

Aleksei Sergeyevich Ionov (Russian: Алексей Сергеевич Ионов; born 18 February 1989) is a Russian professional footballer who plays as a winger for Krasnodar and the Russia national team. 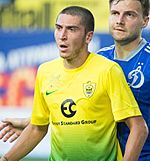 On 3 June 2013, Ionov moved to Anzhi Makhachkala for 5 million euros.

In June 2016, Ionov moved to CSKA Moscow on a season-long loan.

Ionov was a part of the Russia U-21 side that competed in the 2011 European Under-21 Championship qualification.

He made his senior national team debut on 29 March 2011 in a friendly against Qatar. He played his first competitive national team game in the 2014 FIFA World Cup qualifier against Luxembourg on 6 September 2013.

After a two-year break, he was called up for games against Turkey and Czech Republic in September 2018. He scored his first two goals for the national squad on 10 September 2018 in a friendly against the Czech Republic which was played at his club's home stadium, Rostov Arena.

All content from Kiddle encyclopedia articles (including the article images and facts) can be freely used under Attribution-ShareAlike license, unless stated otherwise. Cite this article:
Aleksei Ionov Facts for Kids. Kiddle Encyclopedia.