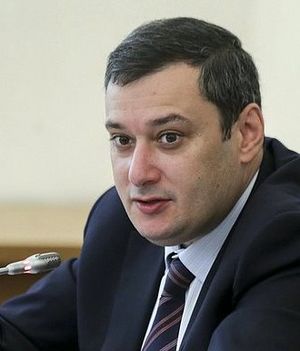 Alexander Khinshtein (Russian: Алекса́ндр Евсе́евич Хинште́йн; born 26 October 1974, Moscow, RSFSR, USSR) is a Soviet and Russian journalist and politician. He is a deputy from the Samara constituency of the State Duma of the Russian Federal Assembly. He was a member of the 4th, 5th, 6th State Dumas. He is currently a member of the 7th State Duma. Deputy Secretary of the General Council of the United Russia Party since November 23, 2019, Chairman of the Committee of the State Duma of the Federal Assembly of the Russian Federation on Information Policy, Information Technologies and Communications since January 22, 2020.

All content from Kiddle encyclopedia articles (including the article images and facts) can be freely used under Attribution-ShareAlike license, unless stated otherwise. Cite this article:
Alexander Khinshtein Facts for Kids. Kiddle Encyclopedia.