Alexander Macomb (1748–1831) was an Irish-born American merchant and land speculator. He built the four-story city house on the west side of Broadway in 1786–1788. Macomb leased it to the French Minister Plenipotentiary, the Comte de Moustier, who occupied it until his return to Paris in early 1790. President Washington purchased furniture, mirrors and draperies from the departing Minister with his own money, including American-made furniture in the French style. Some of these items survive at Mount Vernon and elsewhere.

The first Presidential Mansion was the Samuel Osgood House at 3 Cherry Street in Manhattan, which Washington occupied from April 23, 1789, to February 23, 1790. He had been living there a week before his April 30, 1789, inauguration as the first President of the United States. The Osgood House (demolished 1856) was in the most congested part of Manhattan, near the port along the East River, and Washington found it cramped for his presidential household. The Macomb House was significantly larger, located in a neighborhood just north of the Bowling Green, with an extraordinary view of the Hudson River out its rear windows. 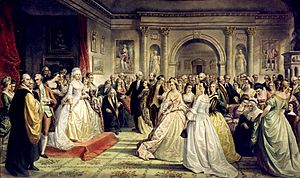 Under the July 1790 Residence Act, the national capital moved to Philadelphia, Pennsylvania, for a 10-year period while the permanent national capital was under construction in the District of Columbia. Washington vacated the Macomb House on August 30, 1790, and returned to Mount Vernon, stopping in Philadelphia to examine what was to become the third Presidential Mansion, the Masters–Penn–Morris House at 190 High Street.

In 1821, the Macomb House was converted into Bunker's Mansion House Hotel: "Bunker's Mansion House, a famous hotel, was situated at No. 39 Broadway, and was a large double-brick house, erected in 1786 by General Alexander Macomb as a residence for himself. It was a most comfortable and well-conducted hotel, and was patronized largely by Southern families. Bunker, who was noted for his affability to his customers, grew rich rapidly, and eventually sold the property and retired from business."

In 1939, the Daughters of the Revolution erected a bronze plaque at 39 Broadway. The house was demolished in 1940.

All content from Kiddle encyclopedia articles (including the article images and facts) can be freely used under Attribution-ShareAlike license, unless stated otherwise. Cite this article:
Alexander Macomb House Facts for Kids. Kiddle Encyclopedia.