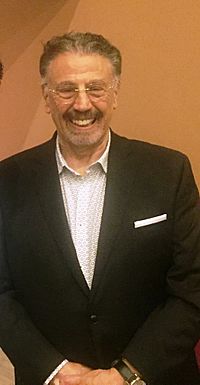 Alfonso Arau Incháustegui (born January 11, 1932) is a Mexican actor, screenwriter and director. He was born in Mexico City. His career began in 1954. He was known for his roles as Captain Herrera in Sam Peckinpah's 1969 western, The Wild Bunch, chief bandit El Guapo in Three Amigos (1986), shady businessman Manuel in the comedy Used Cars (1980), and the smuggler Juan in Romancing the Stone (1984). He directed the movies Zapata: The Dream of a Hero, Like Water for Chocolate and A Walk in the Clouds.

All content from Kiddle encyclopedia articles (including the article images and facts) can be freely used under Attribution-ShareAlike license, unless stated otherwise. Cite this article:
Alfonso Arau Facts for Kids. Kiddle Encyclopedia.