Algonquin is a village in Illinois located in both McHenry and Kane counties. It is a northwest suburb of Chicago, located approximately 40 miles from the Loop. The 2010 Census placed the Village's population at 30,046, growing considerably from the 2000 Census figure of 23,276.

The village is known as "The Gem of the Fox River Valley", since its downtown is nestled in the heart of Illinois' Fox River Valley. Established in 1890 and long known as a small river community, the village is making the transition into a major regional hub, as it has experienced considerable suburban growth over the past 20 years. Now stretching all the way west to the busy Randall Road corridor, Algonquin has become a major commercial center, with popular shopping centers and restaurants, as well as a growing corporate campus. Additionally, the village continues to see considerable residential growth. With this growth, the village has had to deal with challenges including traffic congestion and overburdened schools, yet has managed to increase the commercial tax base, preserve its character and history, and substantially increase its recreational offerings and quality of life. 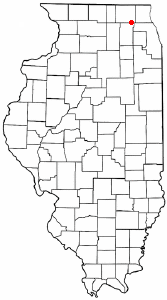 There were 8,000 households out of which 50% had children under the age of 18 living with them, 74.7% were married couples living together, 5.6% had a female householder with no husband present, and 17.8% were non-families. 14.5% of all households were made up of individuals and 3.5% had someone living alone who was 65 years of age or older. The average household size was 3.02 and the average family size was 3.38.

Long before Europeans settled in Algonquin, the Potawatomi Native Americans originally inhabited the land. Algonquin was the location of Indian burial mounds known in the 1800s as the Algonquin Mounds. By 1834 the first settler of Algonquin, Samuel Gillilan, came to the area from Virginia. Settlers Dr. Cornish, Dr. Plumleigh, Eli Henderson, Alex Dawson, and William Jackson arrived shortly thereafter. There was some dispute regarding the original name of Algonquin, and numerous other names were suggested including Denny's Ferry, Cornish Ferry, Cornishville, and Osceola. But Samuel Edwards suggested the name Algonquin and on December 23, 1847, the name Algonquin became official.

The first signs of economic growth occurred in 1855 when the town saw the construction of the railroad, which enabled farmers in the neighboring area to have other means of getting their products to the markets in Chicago. Finally on February 25, 1890 the Village of Algonquin was formed.

From 1906 to 1913, the automobile companies began to go to the Algonquin Hill Climbs, which was an event where if an automobile was able to make it up a series of steep hills in the Village, it would be given the stamp of approval. And because of that, the Algonquin Cup was formed which received national recognition at the time. The two hills used in the race were the Phillips Hill which extends from Illinois Route 31 to the cemetery and Perry Hill, located south of downtown, and which is now Lundstrom Lane. The village created a new hill for the race called Huntington Hill, which is now Huntington Drive. A park stands in place of the finish line of Huntington Hill at the intersection of Huntington Drive and Circle Drive which is called Hill Climb Park. The festival in recognition of the event continues to be held each year.

For much of the 20th century, Algonquin was a quasi-resort town and people from the Chicago area would visit the town in order to escape urban life. The Fox River offered immense recreational opportunities and several summer homes were constructed. Soon, more people began living in Algonquin year-round. Algonquin remained a small town for much of the 20th Century, growing steadily, until the 1980s, when the Village's population exploded with new residential construction. The development continued in earnest in the 1990s and 2000s. The village's first shopping center, Algonquin Town Center, was constructed in the late 1980s on East Algonquin Road and numerous die & mold industries were established west of downtown. In the 1990s, development shifted to Randall Road, which saw the construction of numerous retailers, restaurants, and services, beginning in 1993. In 2004, the 80-store Algonquin Commons outdoor mall (the largest outdoor mall in Illinois) opened for business, followed by the Algonquin Galleria outdoor mall, which is under development and saw its first stores open in 2006. In the mid-2000s, development also began on the Algonquin Corporate Campus, which is slated to include industrial and office development spread over 1,000 acres (4.0 km2) on the southwest side of the Village, bringing hundreds of high-paying jobs to the area.

The Village of Algonquin includes dozens of distinct neighborhoods, most of which are subdivisions.

The Village's oldest neighborhood is the Old Town District. The Old Town District, a neighborhood established by the Village, includes all those areas that were in the Village when the Village was first incorporated. Major streets in this area include Illinois Route 31 (Main Street), Illinois Route 62 (Algonquin Road), Harrison Street, Washington Street, and Front Street. Included in this area are old Victorian homes, small shops, fine restaurants, churches and religious schools, and three of the village's most picturesque parks: Riverfront Park, Cornish Park, and Towne Park. The symbolic Historic Algonquin Village Hall serves as the centerpiece of this area. The Fox River and the McHenry County Prairie Path run through the heart of this area, providing for immense recreational opportunities. Under development in this area are the Riverside Square and Main Street Commons luxury condominium developments, which will add to the character of the village.

Located north of the Old Town District along Harrison Street are the Algonquin Hills and Algonquin Shores neighborhoods, which consist of older homes mostly built before World War II, many of them within proximity to the Fox River. Pioneer Park is located in this area. Located on the west side of Route 31 is the Arrowhead subdivision.

Located on the Village's east side, south of Algonquin Road, east of the Fox River, and west of Sandbloom Road is Rattray's Village Green and other subdivisions, consisting mostly of ranch homes built after World War II. Also embedded in this area, at the northwest corner of Sandbloom Road and Souwanas Trail, is the Alta Vista neighborhood. Located in the heart of this area are Eastview Elementary School, Algonquin Middle School, Snapper Field, Lions-Armstrong Memorial Pool, and the Algonquin Library - Eastgate Branch.

On the east side, north of Algonquin Road, are a series of single family home subdivisions with pockets of multi-family homes embedded within. These subdivisions, built mostly in the 1980s and 1990s include Copper Oaks, Cinnamon Creek, Glen Oaks, Glenmoor, Spring Creek, and Old Oak Terrace. Holder Park and Yellowstone Park are both found in this area. These neighborhoods back up to Algonquin Town Center and other retail developments along East Algonquin Road. Located north of this area, along Highland Avenue, is the expansive Presidential Park and the Prairie Path subdivision, which is pending construction.

Located west of the Old Town District are a series of ranch and two-story homes in multiple subdivisions along Huntington Drive. This area is commonly referred to as High Hill Farms, which was constructed in many phases over several years. Homes in this region were built mostly in the 1970s and 1980s. Hill Climb Park has become the centerpiece of this area, named after the famous auto races of the early 1900s which took place on the Huntington Drive hill. Neubert Elementary School is also located in this area, where Huntington Drive branches off into two streets, Huntington Drive North and Harnish. Highland Glen, a townhome community built in the early-mid-1990s, is located in the northern portion of this area, on the east side of Hanson Road.

West of Hanson Road, south of Algonquin Road, east of Randall Road, and north of County Line Roads are a variety of neighborhoods, mostly built in the late 1980s and the 1990s. These include Fieldcrest Farms, later phases of the High Hill Farms subdivision, Dawson Mill, Falcon Ridge, Arbor Hills, and Tunbridge. The Algonquin Village Hall and Police Department are located in the heart of this area. High Hill Park and Tunbridge Park serve neighborhood residents. Important streets in this area include Huntington Drive, Harnish Drive, and Stonegate Road. The Golf Club of Illinois abuts this area, as do several retail developments along Randall Road.

Located south of County Line Road, along Sleepy Hollow Road and Longmeadow Parkway, and east of Randall Road is the expansive Willoughby Farms neighborhood, built in a variety of phases throughout the 1990s. Westfield Community School and Willoughby Farms Park serve the area. Also in this area is the Brittany Hills subidivision and the under-construction Creek's Crossing neighborhood. The Algonquin Galleria lies just to the west of this region.

West of Randall Road are a variety of townhome developments that serve as a transition between the retail centers along Randall Road and the estate-style developments further west. These developments include Canterbury Place, Millbrook, Creekside, and Winding Creek. Abutting the 100-acre (0.40 km2) Ted Spella Park is the age-restricted community, Grand Reserve. These neighborhoods are all located along the picturesque Woods Creek corridor. Also in this area is the Algonquin Area Public Library District's Main Library and Harry D. Jacobs High School.

Further west of Woods Creek, and stretching west to Square Barn Road, are pricier homes on larger lots, in the Terrace Hill, Terrace Lakes, Prestwicke, Fairway View Estates, Woods Creek Valley Estates, and The Coves developments. These neighborhoods are adjacent to the private Terrace Hill Golf Course, Ted Spella Park, and James B. Wood Park. Homes in this area were built from the late 1980s up until today. Construction of this area is expected to be complete by the end of the 2000s.

West of Square Barn Road is the Manchester Lakes subdivision, a single-family and multi-family home development built over several phases in the 2000s. This neighborhood is adjacent to the Square Barn Commons retail center and Kelliher Park. A variety of lakes and ponds and an extensive trail system can be found within this development. South of Manchester Lakes is the Square Barn Road School Campus, which includes Mackeben Elementary School, Conley Elementary School, Heineman Middle School, and the School District 158 administration building.

Further residential development west of Square Barn Road is expected in the future.

The village is unique in that it does not have an actual park district, as park operations are run by the village itself. Nevertheless, the quality of parks, trails, and programs is nearly unmatched. In addition, the village's scenic waterways remain a regional draw. Some noteworthy recreational opportunities in Algonquin include:

Algonquin is a center of transportation for McHenry and Kane Counties. Some of the major roadways include:

Churches in Algonquin include:

All content from Kiddle encyclopedia articles (including the article images and facts) can be freely used under Attribution-ShareAlike license, unless stated otherwise. Cite this article:
Algonquin, Illinois Facts for Kids. Kiddle Encyclopedia.