Alice in Wonderland is a platform video game developed by Digital Eclipse Software and published by Nintendo for the Game Boy Color. It was released in North America on October 4, 2000. The game follows the plot of the 1951 animated Disney film of the same name. 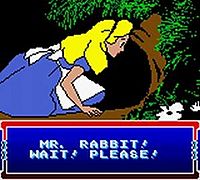 The game's visual style closely follows the 1951 animated Disney film. The cut scenes follow the plot of the movie.

Alice in Wonderland follows the plot of the 1951 animated Disney film of the same name. The game begins with the player as Alice following the White Rabbit down its hole. The plot is used to change the level design from stage to stage, and gives the player a more varied experience through gameplay.

The game changes the level design based on different stages from the film. Alice changes sizes throughout the game, which makes the platform gameplay feel different throughout the game. Levels often deviate from the main platform areas and include other types of sections: one example is where Alice is placed in her miniature form into a bottle and must navigate rapids. The game includes Game Boy Printer support.

All content from Kiddle encyclopedia articles (including the article images and facts) can be freely used under Attribution-ShareAlike license, unless stated otherwise. Cite this article:
Alice in Wonderland (2000 video game) Facts for Kids. Kiddle Encyclopedia.