Kids Encyclopedia Facts
This page is about the Wii game. For the Game Boy Color game, see Alice in Wonderland (2000 video game).

Alice in Wonderland is action-adventure video game published by Disney Interactive Studios. Based on the Tim Burton's 2010 film of the same name, it was released in the same week as the film for the Wii, Nintendo DS, Microsoft Windows and Zeebo, with the soundtrack being composed by video game music composer Richard Jacques. The Wii, DS, and PC versions were released on March 2, 2010. The DS game is completely different from the Wii and PC versions.

Actors who reprised their roles from the film include Mia Wasikowska (as Alice Kingsleigh), Crispin Glover (as Ilosovic Stayne, the Knave of Hearts), Michael Sheen (as Nivens McTwisp the White Rabbit), Barbara Windsor (as Mallymkun the Dormouse), Stephen Fry (as Cheshire), and Leo Bill (as Hamish Ascot). 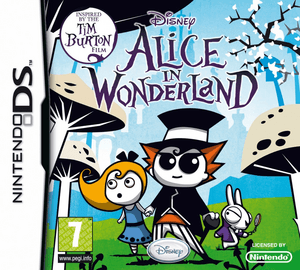 Cover of the Nintendo DS version, which is a different game from other versions

Alice in Wonderland allows players to guide, protect and aid Alice as she journeys through the world of Wonderland while unraveling the game's many twisted mysteries. Along the way, players call on a diverse and unique cast of characters such as the Mad Hatter and Cheshire Cat who each have unique abilities to help evade traps and solve challenging puzzles. The Mad Hatter can help Alice alter her perception of Wonderland and take advantage of optical illusions to open up places in the world the player alone would not have noticed. Meanwhile, the Cheshire Cat can use his ability to make himself and objects appear and disappear helping Alice through this strange world. Players must choose wisely when using each of the characters' powers and combine the abilities to solve more complex puzzles.

The PC version of the game uses the SecuROM copy-protection system; like in most SecuROM-protected games such as Grand Theft Auto IV, Mirror's Edge and Batman: Arkham Asylum, the developers implemented triggers that can impair gameplay, preventing players using an imperfectly cracked copy from completing it.

All content from Kiddle encyclopedia articles (including the article images and facts) can be freely used under Attribution-ShareAlike license, unless stated otherwise. Cite this article:
Alice in Wonderland (2010 video game) Facts for Kids. Kiddle Encyclopedia.