All Saints' Church, Nottingham is an Anglican church in Nottingham, England.

The church is Grade II listed by the Department for Culture, Media & Sport as it is a building of special architectural or historic interest.

A map of the parish is available on Google Maps 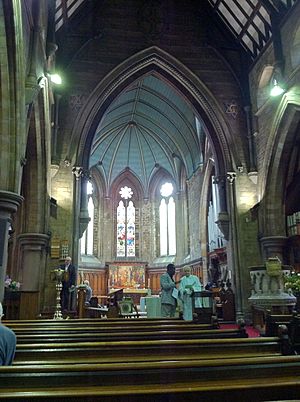 The church was built in Gothic revival style to seat 500, and has a fine broach spire reaching 175 feet (53 m) tall (8th tallest building in Nottingham) and housing a ring of ten bells (the heaviest weighing 16 cwt). The architect was Thomas Chambers Hine, of Nottingham.

The church was consecrated on 3 November 1864. 1200 crammed into the 800 seats</ref> The choir of St. Mary's Church were accompanied by Miss Fanny Brookes on the harmonium. The Rt. Revd. John Jackson, Bishop of Lincoln, performed the consecration service in the presence of the new pastor, Joshua William Brooks.

At the time of its construction, All Saints' Parish was a new wealthy suburb outside the old city boundary of Nottingham on an area previously known as Sandfield. The expansion had been as a result of the 1830s cholera epidemic. With the continued expansion of the City of Nottingham, the parish became an inner-city area of Nottingham which suffered significant decline after the Second World War. By the 1980s it was designated an Urban Priority Area and the congregation declined to around 30–40 at the turn of the millennium.

The old school building, which had fallen out of use in the 1920s, was converted into small workspaces, and half of the original huge vicarage was converted into residences of young single people in the early 1980s. More recently in 2006, following protracted negotiations, the New Deal for Radford bought the old School to refurbish it for use by local organisations.

The church and many of the other buildings are now Grade II listed. It continues to be in use for regular Sunday morning services. Given the small congregation, discussions are underway as to whether there may be other joint uses of the space available.

The six bells were cast by John Taylor & Co of Loughborough on an oak bell frame. At installation in 1864 this was extended to accommodate two extra bells. The bells were tuned in the key of E, the heaviest weighing 17cwt.

In 1999 the bells were tuned and hung in a new steel frame with room for 10 bells. At the same time the redundant All Saints’ School bell was installed as a Sanctus bell. The Nottingham University Society of Change Ringers use the church for practice and also ring the bells for church services.

The first organ was built by Lloyd and Dudgeon from Nottingham and was opened on 6 July 1865.

The current organ is by Norman and Beard and dates from 1906.

All content from Kiddle encyclopedia articles (including the article images and facts) can be freely used under Attribution-ShareAlike license, unless stated otherwise. Cite this article:
All Saints' Church, Nottingham Facts for Kids. Kiddle Encyclopedia.