The Church of St Mary the Virgin is the oldest religious foundation in the City of Nottingham, England, the largest church after the Roman Catholic Cathedral in Nottingham and the largest mediaeval building in the city.

The church is Grade I listed by the Department for Culture, Media & Sport as a building of outstanding architectural or historic interest. It is one of only five Grade I listed buildings in the City of Nottingham.

It is situated on High Pavement at the heart of the historic Lace Market district and is also known as St Mary's in the Lace Market. It is a member of the Greater Churches Group, and part of the parish of All Saints', St Mary's and St Peter's, Nottingham.

The church is mentioned in the Domesday Book and is believed to go back deep into Saxon times. The main body of the present building (at least the third on the site) dates from the end of the reign of Edward III (1377) to that of Henry VII (1485–1509). The nave was finished before 1475 and it is notable for its uniformity of gothic perpendicular style. It is likely that the south aisle wall was the first part of the building to be constructed in the early 1380s, with the remainder of the nave and transepts being from the early 15th century. The tower was completed in the reign of Henry VIII. 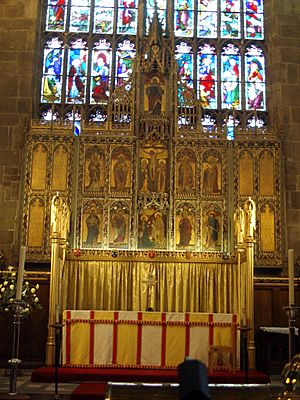 The high altar with the reredos by George Frederick Bodley

The church was owned by Lenton Priory from 1108 to 1538 and the monks took the living of the church as Rector, and appointed a Vicar to perform the daily offices.

In 1513, a school was founded in the church by Dame Agnes Mellers as The Free School of the Town of Nottingham. This is now Nottingham High School. In the Foundation Deed, Mellers provided that a Commemoration Service should be held in the church "on the Feast of The Translation of St Richard of Chichester". With the exception of the Goose Fair, it is the most ancient ceremonial event still perpetuated in the City of Nottingham,

George Fox founder of the Religious Society of Friends, commonly known as the Quakers or Friends, was imprisoned in Nottingham in 1649 after interrupting the preacher at St Mary's.

Nottingham Bluecoat School was founded in 1706, and the first lessons were taught in the porch of the church.

For several years from 1716, the church was used to house the town fire engine. It was kept at the west end, and was still there until at least 1770.

St Mary's opened a workhouse in 1726 at the south end of Mansfield Road and ran it until 1834 when responsibility for workhouses was transferred from parishes to secular Boards of Guardians. The workhouse was demolished in 1895 to clear part of the site needed for the construction of the Nottingham Victoria railway station.

The church was closed for 5 years from 1843 for a major restoration. It re-opened on 19 May 1848 when the Bishop of Lincoln John Kaye presided.

A society of good and well meaning persons which meet every Wednesday and Sunday evenings in the vestry of St. Mary's, pay yearly 6l. 8s. for the instruction of sixteen more poor children; and about six are put to school by the charity of private persons. 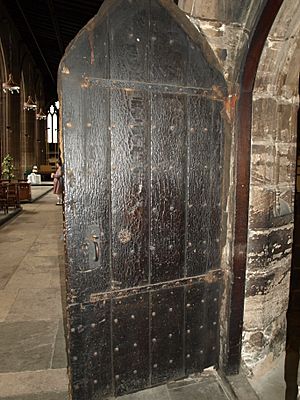 View of the old exterior of the Chantry door 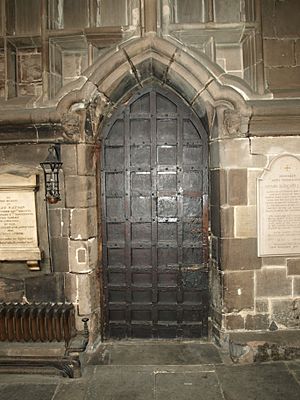 View of the Chantry door from the north aisle

The chantry door is considered to be the oldest surviving door in Nottingham, dating from the 1370s or 1380s. it contains an example of iron work from the medieval period in the locking mechanism.

The chantry room has latterly been used as a bonehouse, a coal store, and a chair store. It now contains a toilet for wheelchair users.

The survival of the door is likely to be due to the fact that it has not been heavily used, and is internal within the church.

Laying on of hands

It was at St Mary's that the practice of laying on of hands by the Bishop during a Confirmation service was first observed ca. 1760 and documented by Thomas Newton, Bishop of Bristol. This laying on of hands was done by John Gilbert, Archbishop of York. 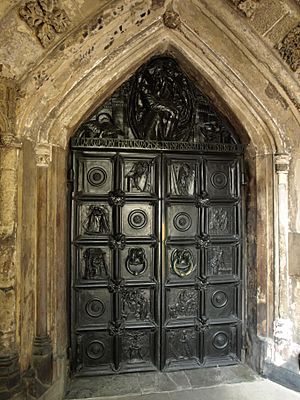 The south porch doors are by the architect Henry Wilson. A complex work in bronze, the door contains 10 panels with New Testament scenes, and two door handles with cherubic heads. A further eight heads are on the cross pieces. Above, Christ and angel with doves.

The bronze doors were designed in 1904 by Henry Wilson in memory of his father-in-law, Revd. Francis Morse.

The intention of the design of the doors is to illustrate the Life of Our Lord in its relation with the Holy Mother to whom the church is dedicated and by the general treatment to suggest the idea of pity.

In the tympanum enclosed within a vesica the Holy Mother supports and cherishes the body of Christ, while in the spandrels, on either side, the gates of Death and Life are suggested: the Dove, typifying the spirit, enters weary into the one and issues strong-winged from the other, thus symbolising the unending round of Death and Life.

The dedicatory inscription "In loving memory of Francis Morse, 1818–1886, Father, Pastor, Friend" in the form of a pierced cresting, divides the tympanum from the doors themselves. These are formed into panels by mouldings of beaten bronze, with angel bosses at the intersections.

On each leaf of the door are five panels, in relief, illustrating the Life of Our Lord, the subjects on the left leaf being “The Annunciation,” with Gabriel appearing at the Virgin’s window in the early morning; “The Visitation,” with the Virgin running to meet her kinswoman. Below these come “The Nativity,” followed by “The Epiphany,” and the lowest panel shows the Salvator Mundi on a Cross of branching vine. At the foot of the Cross stand our first parents, conscious of the fall, while the doves of peace and pardon hover overhead.

The subjects of the panels on the right door of the leaf are “The flight into Egypt”; “The Baptism in the Jordan”; “The entry into Jerusalem”; The three Maries at the Sepulchre”; and “The Resurrection.” In this panel the Saviour is shown emerging from the tomb and while still bound with the grave clothes, the Spirit of Life, in the form of a Dove, flies to His breast, and overhead the birds sing at the coming of a new Dawn.

The church has a fine collection of late Victorian stained glass windows by many famous makers, including Kempe, Burlison and Grylls and Hardman & Co..

It is also known for its octagonal mediaeval font with a palindromic Greek inscription NIΨONANOMHMATAMHMONANOΨIN (Wash my transgressions, not only my face), and a rather battered alabaster tomb fragment which portrays a lily crucifix and a Nottingham Alabaster panel depicting Archbishop Thomas Becket. 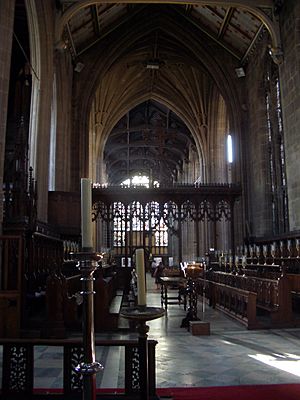 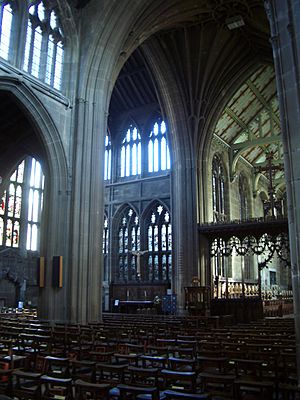 St Mary's has a wide ministry to many different groups. It is the Civic Church to the City of Nottingham. In the past, the election of the town mayor took place in the church and this tradition continues with a welcome to the new Lord Mayor of Nottingham in a service held each summer.

In recent years, in addition to its function as a place of worship, St Mary's is the venue for a wide range of concerts and public performances, and is home to the Nottingham Bach Choir.

The assistant curate at St Mary's takes the ancient title 'Lecturer'. This title which hadn't been used since the seventeenth century, was revived for Revd. John Pennington on his appointment in 1975. The last to hold the post was by Revd. Stephen Morris until 2014.

The church retains the Book of Common Prayer, the traditional Liturgical colours and the principal services are sung by a robed choir.

St Mary's retains the historic practice of celebrating the Eucharist at a High Altar Ad orientem with priest and people facing eastwards, rather than the contemporary practice of Versus populum having the priest facing the congregation. 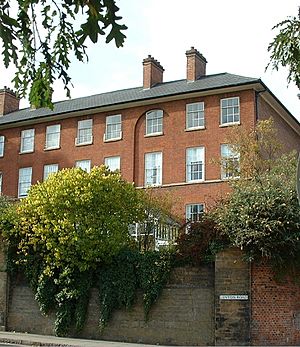 The vicarage of St Mary's was formerly at Washington House on High Pavement, but with the increasing industrialisation of the Lace Market at the end of the 19th century, the church purchased a new residence opposite the castle gatehouse. This was used as St Mary's Vicarage until Canon Eddie Neale retired in 2003.

The adjoining property was the rectory for St Peter's Church, Nottingham.

A joint parish house has now been purchased in The Park Estate.

Notable marriages in the church

There are twelve bells in the ring.

The first record of a tower clock dates from 1707 when a clock was installed by Richard Roe of Epperstone. This was replaced in 1807 by a clock by Thomas Hardy of Nottingham. The 1707 clock was moved to Staunton church.

The current tower clock which dates from 1932 was installed by George & Francis Cope. It was the first electric auto-wind clock by that firm. 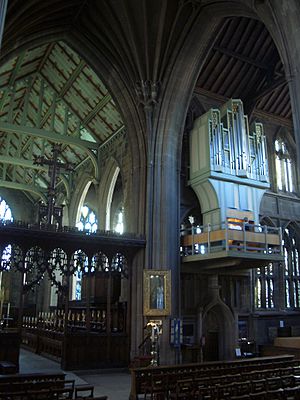 St Mary's has a choir of some standing. Under the leadership of John Keys, the Choir of St Mary's is regarded as one of the county's finest.

Renowned for its versatility and wide repertoire it performs music from plainsong through to world premieres, performs regularly in concert on its own and with St Mary's resident orchestra, The Orchestra of the Restoration. Organ and Choral Scholarships are available to students in full-time higher education.

The Organ is by Marcussen & Søn of Denmark and is a fine example of a neo-classical style instrument. It was installed in 1973 by the organist of the time, David Butterworth. It has 25 speaking stops and is a small organ for a church of this size. Nevertheless, it is a remarkable instrument which adequately gives musical support to choir and congregation as well as being a fantastic solo instrument.

Link to details of the organ on the National Pipe Organ Register.

There are records of organs in the church in the late 16th and early 17th centuries, but no record of any of the organists from this period has been found.

The church is mentioned in Sons and Lovers by D.H. Lawrence, chapter 15. They threaded through the throng of church-people. The organ was still sounding in St. Mary’s. Dark figures came through the lighted doors; people were coming down the steps. The large coloured windows glowed up in the night. The church was like a great lantern suspended.

All content from Kiddle encyclopedia articles (including the article images and facts) can be freely used under Attribution-ShareAlike license, unless stated otherwise. Cite this article:
St Mary's Church, Nottingham Facts for Kids. Kiddle Encyclopedia.