The Parish Church of All Saints' in Ilkley in West Yorkshire, England is an active Anglican parish church in the archdeaconry of Bradford and the Diocese of Leeds.

The church is built on the site of a Roman fort, two Roman altars have been discovered in 1925 built into the tower. Three 8th-century Anglo-Saxon stone crosses, now incomplete, used to be in the churchyard but are now inside, below the tower. The earliest part of the church is the 13th century south doorway. The nave of the church dates back to the 14th century while the tower is of 15th century construction. The church was extended and restored between 1860 and 1861 by Bradford architects Mallinson & Healey. The vestry was extended in 1927 which was subsequently converted into a war memorial chapel following the Second World War. The church was grade II* listed on 18 July 1949.

The church is largely of a Tudor-Gothic style, with 15th and 16th-century work in essentially the same style. The church has a three-stage perpendicular tower with diagonal buttresses and a clock on the south face. The nave has four bays and five light clerestorey windows on the south side and four-light windows dating from 1880 on the north. 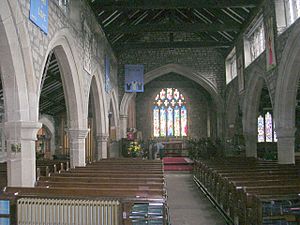 The church's four-bay arcades have octagonal piers. The church is stone-tiled, the chancel has mosaic tiles and the walls are exposed stone. The church has an undecorated medieval tub font on a 19th-century pedestal. The pulpit dates from 1889 and of a square wooden form with centre panels with depictions of Jesus and the disciples.

All content from Kiddle encyclopedia articles (including the article images and facts) can be freely used under Attribution-ShareAlike license, unless stated otherwise. Cite this article:
All Saints' Parish Church, Ilkley Facts for Kids. Kiddle Encyclopedia.