All Saints’ Church stands on a mound close to Lawton Hall in the small village of Church Lawton, Cheshire, England. It is recorded in the National Heritage List for England as a designated Grade II* listed building, and is an Anglican parish church in the diocese of Chester, the archdeaconry of Macclesfield and the deanery of Congleton. 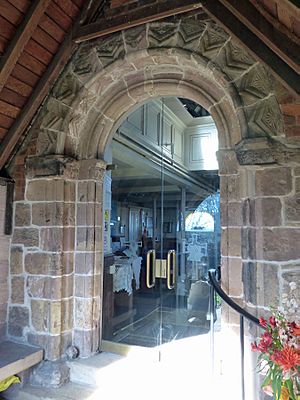 The tower at the west end, dating from the 16th century, is built of red and buff sandstone in Perpendicular style. On the south face of the tower are carved a chalice and the initials "I. B.". These initials are those of the parish priest of the time, John Bybber, or Byber. The bell openings contain Y-tracery. On each side of the church are two lunette windows, with two round-headed windows between them. At the east end of the church is a Venetian window. A Norman doorway which survived the fire has been reset in the south wall of the nave.

Inside the church at the west end is a gallery dated 1717 which also survived the fire. It was planned to refurbish the church in 1873 but the full refurbishment did not occur. At the time the old box pews were replaced with the present pews and a two-manual organ was installed in the gallery. Also inside the church are the royal arms of George III and six hatchments of the Lawton family. At the base of a stairway leading to the gallery is the tomb of John Byber on which are carved his initials. Displayed under the gallery are some 13th-century flooring tiles which were discovered during the 1874 restoration. There is a ring of eight bells. Five of these which are dated 1713 are by Richard Sanders; the other three are by John Taylor and Company, one of which is dated 1882 and the other two are dated 1901. The parish registers start in 1559 and the churchwardens' accounts date from 1691.

The churchyard contains the war graves of two First World War soldiers. In the rectory garden is a font dating from the middle of the 18th century.

All content from Kiddle encyclopedia articles (including the article images and facts) can be freely used under Attribution-ShareAlike license, unless stated otherwise. Cite this article:
All Saints Church, Church Lawton Facts for Kids. Kiddle Encyclopedia.