All Saints Church, Rotherham, also known as Rotherham Minster, stands in Church Street, Rotherham, South Yorkshire, England. Pevsner describes it as "one of the largest and stateliest churches in Yorkshire". On 19 October 1951 it was designated as a Grade I listed building. 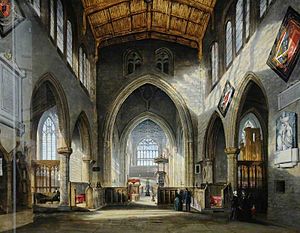 The Interior of Rotherham Parish Church by William Cowen in 1848 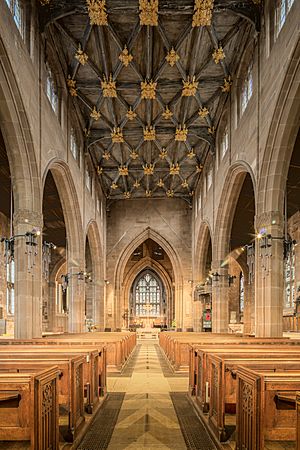 Interior taken from the nave 2017

The origins of the church are fourteenth century and the chancel is of that date. The tower is early fifteenth century and contains a peal of 12 bells. Ten were cast in 1924 and two added in 1986. The remainder of the sixteenth to eighteenth centuries, or of the substantial restoration by George Gilbert Scott in 1873–5. The style is Perpendicular.

The chancel chapel was built in 1480 by Thomas Rotherham, the locally born Archbishop of Lincoln, who subsequently endowed the College of Jesus, attached to the church, on his elevation to the Archbishopric of York.

Alec Clifton-Taylor includes it in his list of "best" English parish churches and describes it as "the glory of Rotherham".

A specification of the 3 manual 1777 John Snetzler organ can be found on the National Pipe Organ Register.

All content from Kiddle encyclopedia articles (including the article images and facts) can be freely used under Attribution-ShareAlike license, unless stated otherwise. Cite this article:
All Saints Church, Rotherham Facts for Kids. Kiddle Encyclopedia.