Allotropes of carbon facts for kids 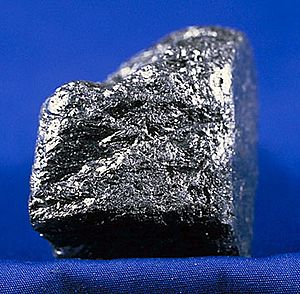 Graphite is a allotrope of carbon

Graphite is one of the most common allotropes of carbon. Unlike diamond, graphite is a conductor, a semi-metal (an element that is partially a metal and a nonmetal, such as black phosphorus and grey selenium). It can be used, for instance, as the material in the electrodes of an electrical arc lamp. Graphite is the most stable form of solid carbon ever discovered.

Allotropes are different forms of the same chemical element. All elements are made up uniquely of their own atoms. Any physical differences are because of how the atoms are joined together. Many elements show allotropy because there are a number of ways in which the atoms can be linked together. Also there are different ways in how the molecules can be arranged to make larger structures. 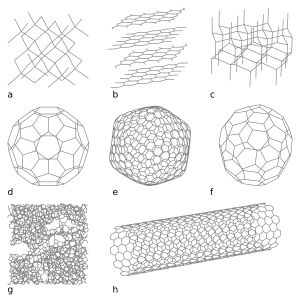 Diamond is one of the best known allotropes of carbon. Its hardness and high dispersion of light make it good for use in jewellery. It is also has industrial uses. Diamond is the hardest known natural mineral. This makes it an excellent abrasive. A diamond also holds its luster well. Both diamond and graphite have extremely high melting point, which is unusual for nonmetallic element.

All content from Kiddle encyclopedia articles (including the article images and facts) can be freely used under Attribution-ShareAlike license, unless stated otherwise. Cite this article:
Allotropes of carbon Facts for Kids. Kiddle Encyclopedia.