Alma is a city in and the county seat of Wabaunsee County, Kansas, United States. As of the 2010 census, the city population was 832. 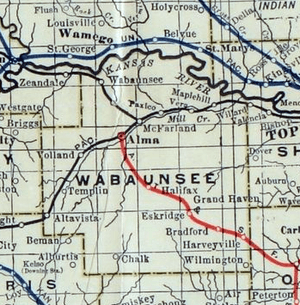 For millennia, the land now known as Kansas was inhabited by Native Americans. In 1803, most of modern Kansas was secured by the United States as part of the Louisiana Purchase. In 1854, the Kansas Territory was organized, then in 1861 Kansas became the 34th U.S. state. In 1859, Wabaunsee County was founded.

In 1887, the Chicago, Kansas and Nebraska Railway built a main line from Topeka through Alma to Herington. The Chicago, Kansas and Nebraska Railway was foreclosed in 1891 and taken over by Chicago, Rock Island and Pacific Railway, which shut down in 1980. This line of the former Rock Island Railroad was sold to the Southern Pacific Railroad and later merged into the Union Pacific that operates and owns the line today. Most locals still refer to this railroad as the "Rock Island".

The city was named after either the city of Alma, Germany, or for a stream in the Ukraine.

Alma is part of the Topeka, Kansas Metropolitan Statistical Area.

There were 342 households, of which 30.1% had children under the age of 18 living with them, 51.5% were married couples living together, 7.3% had a female householder with no husband present, 3.2% had a male householder with no wife present, and 38.0% were non-families. 34.5% of all households were made up of individuals, and 19.5% had someone living alone who was 65 years of age or older. The average household size was 2.35 and the average family size was 3.03.

All content from Kiddle encyclopedia articles (including the article images and facts) can be freely used under Attribution-ShareAlike license, unless stated otherwise. Cite this article:
Alma, Kansas Facts for Kids. Kiddle Encyclopedia.