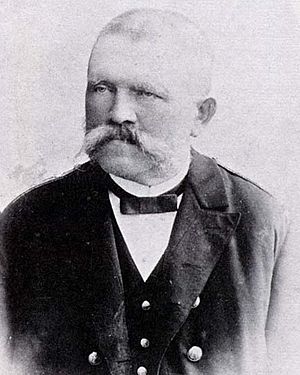 Alois Hitler (born Alois Schicklgruber, 7 June 1837 – 3 January 1903) was the father of Adolf Hitler. He was born in Waldviertel. His third marriage, from 1883 until his death, was to Adolf's mother, Klara who was also his niece. He was an Austrian customs official. He retired to a farm in 1895 and he was a beekeeper which means that he collected bees so that they could produce honey. He died of a stroke in Linz aged 65.

He changed his name from Alois Schicklgruber to Alois Hitler.

All content from Kiddle encyclopedia articles (including the article images and facts) can be freely used under Attribution-ShareAlike license, unless stated otherwise. Cite this article:
Alois Hitler Facts for Kids. Kiddle Encyclopedia.