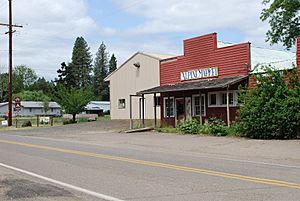 Alpine is an unincorporated rural community and census-designated place in Benton County, Oregon, United States. It is west of Monroe off Oregon Route 99W. As of the 2010 Census, the population was 171.

Alpine was so named because it is on the top of one of the foothills of the Central Oregon Coast Range. It is noted that the "situation is not particularly alpine in character". Alpine School operated for several years before there was a settlement in the location, thus the community took its name from the school. In 1908, the Corvallis and Alsea River Railway Company began construction of a line that ended in the settlement of Alpine when funding ran out. The community has burned three times since its heyday in the early 1900s. A post office was established in 1912 and operated until 1976. Alpine now has a Monroe mailing address. Alpine Elementary School closed in 2003. When the Alpine Market closed in 2004, the Alpine Tavern (built in 1936) started selling groceries. In 2005, a vintage photograph of the tavern was featured in a Miller Beer advertisement, and the market was due to be razed.

Alpine is on the Benton County Scenic Loop, a scenic driving route.

To the west of Alpine is the Woodhall Vineyard, a research vineyard operated by Oregon State University.

All content from Kiddle encyclopedia articles (including the article images and facts) can be freely used under Attribution-ShareAlike license, unless stated otherwise. Cite this article:
Alpine, Oregon Facts for Kids. Kiddle Encyclopedia.