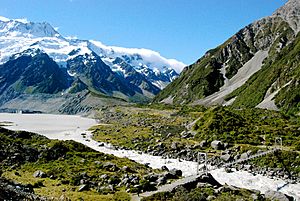 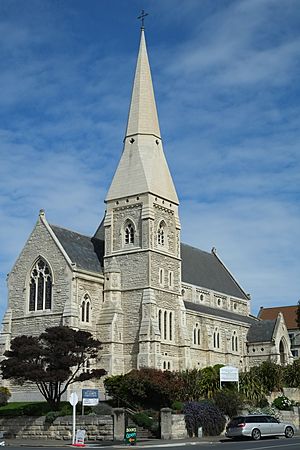 The Alps 2 Ocean Cycle Trail is a cycle trail funded as one of the projects of the New Zealand Cycle Trail. The trail extends more than 300 kilometres (190 mi) from Aoraki / Mount Cook to Oamaru on the Pacific Ocean. Suitable for all ages, the trail is an easy grade, and offers a mix of on and off-road trails.

Funding for the trail from the NZCT budget was approved in July 2010, after the trail had been shortlisted as one of 13 from 54 nationwide proposals.

The trail has been described by Tourism Waitaki general manager as the greatest tourism opportunity the Waitaki Valley region had ever seen.

The trail comprises eight sections, and from west to east descends from 780 metres (2,560 ft) down to sea level:

The 32 kilometres (20 mi) long first section starts out on a dedicated cycle trail, ideally suitable for mountain bikes, and continues on a quiet gravel road. The first section is the most remote of the trail and includes some unbridged stream crossings. Braemar Station offers only limited accommodation – one option is to include the second section on the first day of riding.

Continuing on a gravel road over hilly terrain, this 43 kilometres (27 mi) section takes in the southern shore of Lake Pukaki and the hydro-electric system of the area around Twizel once on sealed roads. Towards Twizel, the cycle trail leads across Pukaki Flats, an area of tussock grasslands typical for the Mackenzie basin. Twizel is the largest town along the cycle path until the end at Oamaru.

The third section is 38 kilometres (24 mi) long and is the only one with a slight gain in elevation. It partly follows canals that are part of the hydro-electric system connecting the glacial lakes. A dedicated cycle trail skirts the southern shore of Lake Ohau, finishing on a sealed road to Lake Ohau Alpine Village and the Lake Ohau Lodge.

The dedicated cycle trail in this section leads through remnants of old beech forest and includes the biggest elevation changes, climbing about 400 metres (1,300 ft) along the Ohau Range to the highest point on the trail at over 900 metres (3,000 ft) above sea level, before descending even more to finish a total of about 100 metres (330 ft) lower after a total length of 40 kilometres (25 mi).

The first half of this 24 kilometres (15 mi) section over the Omarama Saddle is on a dedicated cycle trail next to SH83, the second half is on the state highway itself.

Continuing into the Waitaki Valley, the sixth section, 44 kilometres (27 mi) long, follows sealed public roads and takes in Benmore Dam, the largest dam within the Waitaki hydro-electric power scheme, as well as Aviemore Dam and Waitaki Dam. A new off road 16-kilometre section from Sailors Cutting to the top of the Benmore Dam in the Waitaki Lakes region follows the Ahuriri arm of Lake Benmore providing views of the lake. $1.2 million was spent creating the section. It opened at the end of 2020. The new section is mostly easy riding although there are 5.5km of narrower sections.

From Kurow, the cycle trail continues 23 kilometres (14 mi) off-road to Duntroon, in an area well known for its limestone formations, Maori rock drawings and dinosaur fossils of the "Vanished World".

The last section partly follows the Vanished World trail and past the Elephant Rocks on a mix of sealed public back roads and dedicated cycle trails. From Weston, the cycle trail follows an old railway line and enters Oamaru via the Oamaru Gardens. It finishes after 55 kilometres (34 mi) at Friendly Bay, adjacent to Oamaru's Victorian Historic Precinct.

All content from Kiddle encyclopedia articles (including the article images and facts) can be freely used under Attribution-ShareAlike license, unless stated otherwise. Cite this article:
Alps to Ocean Cycle Trail Facts for Kids. Kiddle Encyclopedia.