Duntroon (from Scottish Gaelic: Dùn Treòin) is a small farming town in the Waitaki District of New Zealand's South Island. Although traditionally considered a North Otago town, it is located within the farthest southern reaches of Canterbury. Just north of the town is the Waitaki River that forms the traditional border between the two regions, although the official border has now been moved south to put most of Waitaki District within Canterbury, including Duntroon. To the east of the village is the Maerewhenua River. Near the village are the Earthquakes, a limestone cliff formation. 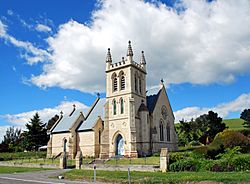 The 2001 census recorded Duntroon as having a population of 120, consisting of 69 females and 51 males, an increase of 3 people or 2.6% since the 1996 census. By the 2006 census the population had declined to 114. The town was named by Scottish settler and farmer Robert Campbell. Economic activity has been mainly agricultural for much of the town's history, focusing primarily on sheep farming and the growth of crops such as wheat and barley.

Duntroon is home to the Vanished World Heritage Centre, dedicated to showcasing the geology of the Waitaki region and preserving fossils of extinct species that have been found in the region. These include two species of the penguin genus Archaeospheniscus, Lowe's penguin and Lopdell's penguin, found in the Kokoamu Greensand formation. The town is also located near two sites of centuries-old Māori rock drawings.

5 kilometres (3 mi) south of Duntroon, in the Maerewhenua Valley, a group of large rock formations called "Elephant Rocks" has been used as a filming location for the first Chronicles of Narnia movie in 2005. The rock formations are located in a private field and can be seen from the road.

Duntroon was once the terminus of the branch line railway that ultimately became the Kurow Branch, and was one of the few towns to be served by a railway station for the entire life of the line (most others were closed earlier than the line itself). In 1875, the railway from the junction with the Main South Line at Pukeuri was opened to Duntroon, but due to bridging difficulties, the line terminated outside Duntroon on the east side of the Maerewhenua River. In 1878, construction began on another line from Duntroon to Kurow; on 2 July 1881, the Maerewhenua River was bridged and Duntroon was linked to the national railway network; on 7 November 1881, the line beyond Duntroon opened and the town lost its status as terminus. The railway served the town for over a century, closing in mid-1983, and the old railway station now serves as boutique accommodation for fly fishermen and cyclists on the A2O cycle trail. Near the station building, an old water tank for steam locomotives still stands in good condition.

Duntroon is on the route of the Alps to Ocean Cycle Trail, which was constructed from 2011 after approval in 2010.

All content from Kiddle encyclopedia articles (including the article images and facts) can be freely used under Attribution-ShareAlike license, unless stated otherwise. Cite this article:
Duntroon, New Zealand Facts for Kids. Kiddle Encyclopedia.