Amby is a rural town and locality in the Maranoa Region, Queensland, Australia. In the 2016 census the locality of Amby had a population of 86 people.

Amby takes its name from the Amby Creek; Amby is possibly a word meaning "little girl" in Kogai dialect of Mandandanji language.

The Amby Downs pastoral station is believed to have been established before 1860.

A postal receiving office opened at Amby around 1883, and became a post office around 1900; it continues to operate out of the Amby Store. 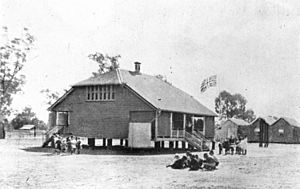 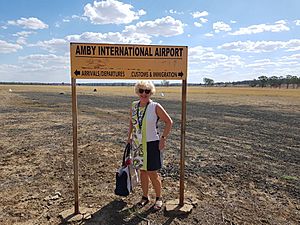 All content from Kiddle encyclopedia articles (including the article images and facts) can be freely used under Attribution-ShareAlike license, unless stated otherwise. Cite this article:
Amby, Queensland Facts for Kids. Kiddle Encyclopedia.