Americus Vespucius Rice (November 18, 1835 – April 4, 1904) was a nineteenth-century politician, banker, and businessman from Ohio. He served in the Union Army during the American Civil War and was appointed brigadier general at the end of the war, on May 31, 1865. From 1875 to 1879, he served two consecutive terms in the United States House of Representatives. 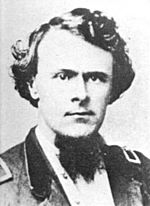 At the outbreak of the Civil War, Rice was commissioned as a captain in the 21st Ohio Volunteer Infantry Regiment on April 27, 1861, and served until his regiment was mustered out of service on August 12 of the same year.

As colonel of the 57th Ohio Infantry at the Battle of Kennesaw Mountain in the Atlanta Campaign, he was wounded and his right leg was amputated.

On January 13, 1866, President Andrew Johnson nominated Rice for appointment as a brigadier general of volunteers to rank from a May 31, 1865, appointment date. Rice was mustered out of service on January 15, 1866. The United States Senate confirmed the appointment on February 23, 1866.

After the war, he became a member of the Ohio Commandery of the Military Order of the Loyal Legion of the United States – a military society consisting of officers who had served the Union and their descendants.

After the close of the war, Rice was manager of a private banking house in Ottawa, Ohio, was a delegate to the Democratic National Convention in 1872 and was elected a Democrat to the United States House of Representatives in 1874, serving from 1875 to 1879, not being a candidate for renomination in 1878. There, he served as chairman of the Committee on Invalid Pensions from 1877 to 1879. Afterward, he was president of A.V. Rice & Company, a banking concern in Ottawa, Ohio, was a director in various business enterprises and was appointed a pension agent for Ohio in 1893, serving from 1894 to 1898. Rice moved to Washington, D.C., in 1899 and engaged in banking and other various enterprises and was appointed a purchasing agent for the United States Census Bureau which he served as until his death in Washington, D.C. He was interred in Arlington National Cemetery in Arlington, Virginia.

Americus Vespucius Rice was a direct descendant of Edmund Rice, an English immigrant to Massachusetts Bay Colony, as follows:

All content from Kiddle encyclopedia articles (including the article images and facts) can be freely used under Attribution-ShareAlike license, unless stated otherwise. Cite this article:
Americus V. Rice Facts for Kids. Kiddle Encyclopedia.