Amherst is a village in Portage County, Wisconsin, United States. The population was 1,035 at the 2010 census. Amherst is at the core of the Tomorrow Valley area.

The name Amherst was established in 1853 by Adam Uline, after General Amherst of Revolutionary fame and the fact he was native of Amherst, Nova Scotia. The first known settler of Amherst was John F. Hillstrom, who arrived in 1851, while John and A. P. Een follow closely behind, arriving in August, 1852.

There were 434 households, of which 35.5% had children under the age of 18 living with them, 45.2% were married couples living together, 12.2% had a female householder with no husband present, 5.8% had a male householder with no wife present, and 36.9% were non-families. 31.6% of all households were made up of individuals, and 15% had someone living alone who was 65 years of age or older. The average household size was 2.38 and the average family size was 2.99.

Amherst connects to U.S. Highway 10 (US 10). The Canadian National Railway main line runs through the village, on an elevated grade.

The Amherst Millpond is a 48-acre, hard water impoundment located in the village of Amherst. The mill pond was created by a dam on the Tomorrow River and was once used for power to the local feed mil. The pond has a maximum depth of five feet and a bottom consisting of sand covered with silt. The Tomorrow River is navigable above and below the dam, and there are two public access points on the east side of the pond; the boat landing and Cate Park. The pond has northern pike and panfish for fishing. 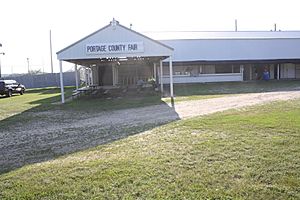 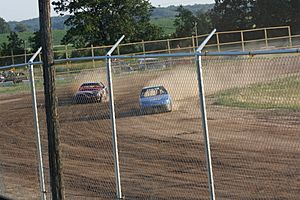 Amherst is home to the Amherst Telephone Company/Tomorrow Valley Communications. Amherst Telephone Company was incorporated on July 3, 1903. Capital to form the new company was provided by 62 area residents who pledged $25 each to buy a share of stock. The company provides copper and fiber service to Amherst and the surrounding communities of Rosholt, Amherst Junction, and Polonia.

All content from Kiddle encyclopedia articles (including the article images and facts) can be freely used under Attribution-ShareAlike license, unless stated otherwise. Cite this article:
Amherst, Wisconsin Facts for Kids. Kiddle Encyclopedia.