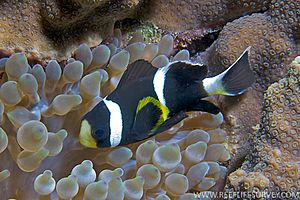 A. mccullochi juvenile on E. quadricolor

Amphiprion mccullochi, also known as whitesnout anemonefish or McCulloch's anemonefish, is a species of anemonefish found in subtropical waters at Lord Howe Island and Norfolk Island.. It was named for Allan McCulloch, a former Curator of Fishes at the Australian Museum, Sydney. Like all anemonefishes it forms a symbiotic mutualism with sea anemones and is unaffected by the stinging tentacles of the host anemone. It is a sequential hermaphrodite with a strict sized based dominance hierarchy: the female is largest, the breeding male is second largest, and the male non-breeders get progressively smaller as the hierarchy descends. They exhibit protandry, meaning the breeding male will change to female if the sole breeding female dies, with the largest non-breeder becomes the breeding male.

Some anemonefish species have color variations based on geographic location, sex and host anemone. A. mccullochi does not show any of these variations.

A. mccullochi is similar in appearance to A. melanopus which is distinguished by its reddish chest, belly and dorsal fin, with a yellowish to slightly red tail. The white bars are also connected over the top of the head. Genetic analysis suggested evolutionary connectivity among samples of A. mccullochi and A. akindynos. Historical hybridization and introgression in the evolutionary past resulted in a complex mitochondrial DNA structure. There were two evolutionary groups with individuals of both species detected in both, thus the species lacked reciprocal monophyly. There were no shared haplotypes between species.

The relationship between anemonefish and their host sea anemones is not random and instead is highly nested in structure. A. mccullochi is highly specialised, being hosted with only 1 species of anemone:

This species has bred in captivity.

All content from Kiddle encyclopedia articles (including the article images and facts) can be freely used under Attribution-ShareAlike license, unless stated otherwise. Cite this article:
Amphiprion mccullochi Facts for Kids. Kiddle Encyclopedia.