Amusu Theatre is a heritage-listed cinema and theatre at 17 Derowie Street, Manildra, Cabonne Shire, New South Wales, Australia. It was designed by Allan Tom and built in 1936 by Jim Fullerton. It is also known as Amusu Cinema. The property is owned by Cabonne Council. It was added to the New South Wales State Heritage Register on 26 November 1999.

Movies were first screened at Manildra around 1910. In 1914 they were shown in Fleeting's Hall, Derowie Street. Starting during the silent era, Allan Tom quickly adapted equipment for the "talkies". Known as a travelling picture show pioneer, Tom toured the central Western and goldfields areas of New South Wales from the early 1920s into the 1940s - to areas as far afield as Cobar, Bourke and Hillston. During the Great Depression he showed movies in a tent, providing desperately needed support and entertainment in remote areas.

He moved into Reid's Hall in 1923, then onto the Memorial Hall in Kiewa Street after its construction in 1925. He built the Amusu in 1936 in Derowie Street with seating for 300 on one level. The name Amusu was derived from contact with an equipment supplier in early 1930s. Allan Tom collaborated with a local school teacher to draw up the plans. Tom's passion for sound meant he had to ensure the theatre would have good acoustics. For this reason he lined the theatre with Donaconna board, a material imported from USA. Tom employed a local Manildra resident to build the cinema Jim Fullerton. For two decades he also operated theatres in Millthorpe and Tullamore.

Allan Tom battled through drought, flood, depression, advent of clubs, television and video, finally reducing his screenings to Saturday nights only. Not withstanding his advancing years, he continued to operate the Amusu until his death in 1995, aged 93. The Tom family continues operating the theatre, despite a temporary closure to undertake safety repairs.

In addition, the Tom family has strong historic links to early squatter days and the first discovery of gold. Nationalism is commemorated in incorporation of "Australia" within the names of various members of the Tom family, including being Allan's middle name, and having links to the Australia Theatre in Orange.

The theatre and adjacent garage were acquired by the Cabonne Shire Council in 2003.

The theatre is now operated by a committee and conducts new release screenings every third Saturday night of the month and special screenings by arrangement. The neighbouring Tom's Garage has been converted into a movie poster museum with a collection of 30,000 posters, with the help of a $50,000 state government grant.

The Amusu Theatre has an Art Deco-style facade featuring a distinctive stepped parapet typical of that found within many small country towns. Within the two story high fibro facade is featured a small central sash window. Within the upper sash is the word "Amusu" in decorative lead light coloured glass.

Behind the facade is an industrial hall constructed from corrugated iron for the walls and gable end roof. The upper portion of the building, facing the street, houses the first floor projection room, inclusive of its historic working equipment.

The theatre evokes a unique atmosphere with its sloping timber floor, seating and c. 1930s features. This atmosphere is enhanced by screenings of archival footage of cartoons and newsreels, c. 1940s, in addition to commercial current releases on Saturday nights.

The theatre has never received remodelling in the conventional sense, but was routinely upgraded over the years within its original style - that of an unadorned, rather plain country hall-type cinema with some art deco elements. Although Allan Tom was always keen on new innovation - cinemascope screen, better sound equipment, etc., the retired models were kept for display within the theatre.

The structure of the theatre was reported as generally sound as at 27 August 2010, although leaks in the roofing iron had caused ceiling damage and the seating needed re-upholstery. Some rewiring and service upgrading had been undertaken for a fire safety audit in 1990.

The equipment continues to be in working order. The building and its interior has remained largely uncharged since its construction. 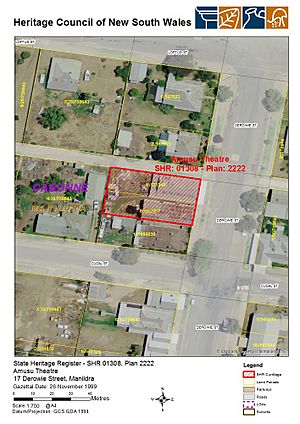 The Amusu Theatre is an important example of a small half-hall purpose-built cinema in a rural town with a very small population, which has been continuously operated under the one ownership since its construction in 1936. [The ownership has changed to the council since the building was heritage-listed.]

The cinema is a tangible link with the earliest days of the movie industry and its impact upon communities, especially those in rural Australia, throughout the 20th century. The building contains a collection of movie memorabilia, fixtures and fitting which evokes an understanding of its social and cultural significance. The building and its contents, as a total package, is a rare educative and evocative resource

Amusu Theatre was listed on the New South Wales State Heritage Register on 26 November 1999 having satisfied the following criteria.

The Amusu is a living icon of the importance in the course and pattern of NSW's cultural history that was played, and continues to play by, film and cinemas. The Amusu has direct association with the life and work of Allan Tom, the travelling picture show man, whose contribution throughout the bulk of the 20th Century to NSW cultural life was recognised by the award of the OAM. Few other cinemas in NSW have operated continuously since construction, in this case 1936. Member of pioneer family with direct links to squatting, sheep runs and first discovery of gold at Ophir; association with the evolution of the movie and cinema industry in Australia from the silent era to 1990s; known as "The travelling picture show man".

Possibly no other continuously operating picture theatre has such historical - albeit historic connotations with its association with a person of Alan Tom's background as a travelling picture show man [from 1923], and being recognised with an AM for his contribution to entertainment in Australia.

The theatre's small but slightly pretentious facade is an important and recognised part of the streetscape of its small community.

The Amusu has strong and special association with central and western NSW for the role it and Tom played in rural communities' social and cultural life The Amusu has provided social and cinematic entertainment continuously to its community for over sixty years. When on the road, the Amusu Touring Talkies often provided the only entertainment other than the occasional bush dance. Very few, perhaps no other cinema in NSW has operated continuously by the same family since construction - in this case a period of 63 years. Few, if any cinemas in NSW, possess the memorabilia, records of purchases and film bookings for such a long period as the Amusu does.

The Amusu has potential to yield information that will contribute to an understanding of NSW's cultural history and the role of cinemas. . The Amusu's importance lies in its ability to demonstrate a high degree of creative or technical achievement in adaptation of then new technologies to harsher conditions within rural NSW. Few cinemas in NSW apart from the Amusu, have arc-lamp projectors dating from the 1930s and 1940s in operational condition (although a number have had them dormant for many years in closed projection boxes). The building and its contents demonstrates how cinematography developed throughout the 20th century. The still operating equipment is a valuable resource, and retains the ability to play various mediums where such machinery is becoming increasingly harder to procure; collection of cinema objects, once common place, are becoming scarce. Wrapped up in the Amusu is a host of memories and events that made it the social hub of such country towns of the day. The place is very evocative and by just being within the building, people can easily image and experience what it was like to go to the movies in the 1930s.

The Amusu possesses uncommon, rare and endangered aspects of NSW cultural history being a rare surviving purpose built, corrugated iron building with continuous use since being built and by the same family. Although once common place throughout Urban and Regional NSW, early 20th century theatre structures are becoming rare, whether grand 1000 seat or 300 seat capacities. This is especially so when coupled with one still being used for its original purpose. The continuous operation of the Amusu as a cinema, run by the same family, inclusive of its original fixtures and fittings, is rare. The combination of its building materials, its continuous use and by the same historic family with all the moveable heritage items largely intact, as a total package the Amusu is unique [Thorn 1999].

The Amusu's importance is contained within its ability to demonstrate the principal characteristics of cinemas as a class of NSW cultural places and the collection of memorabilia and records which traces its life over the last 63 years.

15 halls of entertainment (including Schools of Arts and open air theatres) are listed within Cabonne LGA. Of these 9 were purpose built but only the Amusu continues to operated in its original state and has a category 1 classification. Within the Central Tablelands and Central West Region of NSW 64 such structures are listed in Thorn et al. Of these four (4) are cited as having the highest category 1 rating, being the Amusu, The Palace in Parks (which has been adapted for another use), the Empire/Australia in Orange (which has since been converted into multiple smaller modern theatrettes in 1997) and Strand in Orange (which has been adapted to another use). In terms of fabric, the Victoria Theatre in Newcastle dates from the 1890s although its decor is of 1921.

All content from Kiddle encyclopedia articles (including the article images and facts) can be freely used under Attribution-ShareAlike license, unless stated otherwise. Cite this article:
Amusu Theatre Facts for Kids. Kiddle Encyclopedia.