An Stùc facts for kids 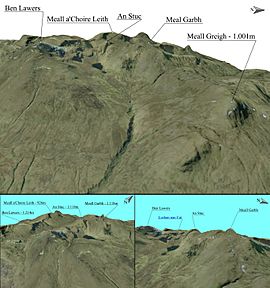 The normal routes of ascent are via the ridges from Ben Lawers or Meall Garbh, in combination with other summits in the range. It may also be ascended directly from the Lawers Burn to the east via a gully above Lochan nan Cat.

All content from Kiddle encyclopedia articles (including the article images and facts) can be freely used under Attribution-ShareAlike license, unless stated otherwise. Cite this article:
An Stùc Facts for Kids. Kiddle Encyclopedia.