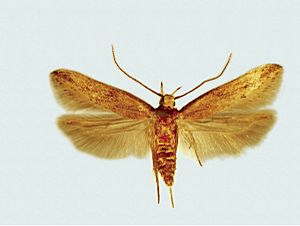 A specimen collected by CSIRO

The Angoumois grain moth (Sitotroga cerealella) is a species of gelechioid moth. It is the type species of its genus Sitotroga, placed in the subfamily Pexicopiinae of the twirler moth family (Gelechiidae). Formerly, it was included in the "Chelariinae", which more recent authors do not separate from the Pexicopiinae and usually even do not consider a distinct tribe ("Chelariini") within them.

It has a nearly global distribution today, including essentially all of Europe as well as such far-flung places as Australia, Benin, Brazil, China, Indonesia, Japan, Samoa and the United States. This is due to its synanthropic habits, which allow it to be easily transported in international grain shipments. Its common name refers to Angoumois, the pre-revolutionary province of France from which it was first scientifically described by G.-A. Olivier in 1789. The province was transformed into the present-day Charente département the following year, and as it has since turned out the species is not originally native to western France.

The adults' wingspan is 13–20 mm. Its caterpillars feed on grains of Asian rice (Oryza sativa), pearl millet (Pennisetum glaucum), sorghum (Sorghum bicolor), wheats (Triticum) and maize (Zea mays). They bore into the seeds of the host plant and feed inside the seed covering. Consequently, this moth is considered a pest of stored cereals. More unusually, the caterpillars have been recorded to eat other dry plant matter, such as plant specimens stored in herbaria.

Junior synonyms of the Angoumois grain moth are:

All content from Kiddle encyclopedia articles (including the article images and facts) can be freely used under Attribution-ShareAlike license, unless stated otherwise. Cite this article:
Angoumois grain moth Facts for Kids. Kiddle Encyclopedia.