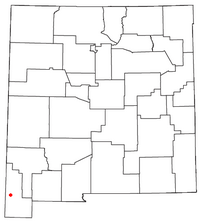 Location of Animas within New Mexico 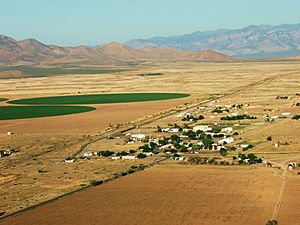 Founded around 1753 by the Spanish, Animas became part of the newly independent country of Mexico in 1821. Unlike most of New Mexico, Animas was not part of the Mexican Cession after the Mexican–American War ended; it is located in the area sold to the United States with the Gadsden Purchase of 1853.

Animas is an isolated ranching community. It is located in the valley bounded by the Peloncillo Mountains on the west and the Pyramid Mountains and Animas Mountains on the east. It is situated just west of the Continental Divide and is approximately thirty miles from Lordsburg, the nearest significant population center. Smaller communities closer to Animas include Cotton City, Playas, and Rodeo. Animas lies in a region rich in Native American history -- twenty-one different archeological sites in the Animas area are listed on the National Register of Historic Places.

All content from Kiddle encyclopedia articles (including the article images and facts) can be freely used under Attribution-ShareAlike license, unless stated otherwise. Cite this article:
Animas, New Mexico Facts for Kids. Kiddle Encyclopedia.