Aniseia martinicensis is a species of herb climber in the Convolvulaceae family. Native to subtropical and tropical America, it has been introduced to the tropics and sub tropics of Pacific Islands, Australia, Asia and Africa. It is eaten, usually as a supplementary vegetable (when people want something different in their diet). Even though it grows around the world, in a variety of habitats, it is a rare plant. 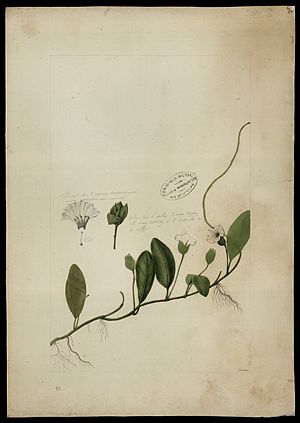 The taxa grows as a vine, with a herbaceous (not woody) stem. The stem can be smooth to sparsely hairy. The hairless leaves are narrowly lanceolate, with an obtuse to acute base and an obtuse, mucronate apex, an entire margin and some 4-8cm long. The acuminate flowers, mainly solitary on the leaf axil, with peduncles some 5cm long. Five broadly ovate sepals, where the outer 2 are broader than inner 3 and are some 12-17mm long. The white corollas are campunulate and are some 25-30mm long. Fruits are ovoid and capsular, some 2cm long, and are subtended by the enlarged calyx. The black seeds are smooth.

In Bangladesh it flowers from September to November.

The plant grows in a variety of habitats, from humid to dry and semi-arid, including flooded forests and grasslands, from 0 to 499m altitude.

It grows as an annual, along marshy ridges in swamps, requiring moist ground, it is often abundant in rice fields, tends to commoner near coasts, it can also be found in deciduous forests, grasslands and marine intertidal areas.

In Manikganj District, central Bangadesh, the taxa is found in a small number of the fallow areas of homesteads, and is regarded as critically endangered.

As noted top right, the plant is rated as Least Concern for conservation. It is widely distributed around the world without any known threats. However it is a rare plant and therefore a level of concern is conferred to it.

The leaves of the species are sometimes gathered as a vegetable, particularly in Indonesia and Malaysia. The seeds are used in a traditional medicine system.

In Cambodia, during the famine years of the Khmer Rouge, the whole plant, stem included, was cooked and eaten. It is still used as supplementary vegetable (when diversity of food is desired) in the 'flooded village' (of Stilt houses) of Peam Ta Our, in the Tonle Sap floodplain, Puok District, Siem Reap province, it is eaten raw or cooked in soups.

This species was named by the Swiss botanist Jacques Denys Choisy (1799-1859) in 1837. Choisy was, as well as a botanist, a member of the clergy and a theologian/philosopher. The species description was published in Mémoires de la Société de Physique et d'Histoire Naturelle de Genève (Geneva & Paris). Choisy's name superseded that of Nederlander-Austrian botanist Nikolaus Joseph von Jacquin (1727-1817), who named the taxa Convolvulus martinicensis in 1763.

All content from Kiddle encyclopedia articles (including the article images and facts) can be freely used under Attribution-ShareAlike license, unless stated otherwise. Cite this article:
Aniseia martinicensis Facts for Kids. Kiddle Encyclopedia.