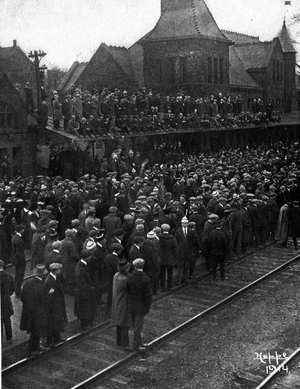 The Michigan Central Railroad was constructed through Ann Arbor in 1839, and quickly became the center of travel and shipping for Ann Arbor. The line reached Chicago by 1852.

By the late 1880s, the railroad was replacing depots at a number of stations along its lines. Each depot was of a different design, and for the Ann Arbor station, the railroad selected Frederick Spier of the Detroit firm Spier & Rohns as the architect. The station was built by Gearing and Sons, also of Detroit, and completed in 1886. Two other small buildings, a railway express office and a baggage station, were constructed nearby.

However, the rise of the automobile led to the decline of passenger trains, which accelerated in the 1950s. By the 1960s, passenger service had slowed to a trickle, and in 1970 the railroad sold the station to restaurateur Chuck Muer, who converted the station int a restaurant, the Gandy Dancer. In 1976, the restaurant was expanded, enclosing the space between the main depot and the former baggage station.

The Michigan Central Railroad Depot is a Richardsonian Romanesque structure built solely of rock-faced masonry. The stones were quarried from Four Mile Lake, located between Chelsea and Dexter. The architectural features of the building, such as arches and lintels are emphasized by changes in color and texture in the stone. The building has a high gable roof with two dormers. The eastern portion of the building has large arched windows, and the western portion has double-hung windows with small circular ones above. The main entrance is through a large round-topped arch; the doorway had been modernized.

The interior of the original depot featured an elaborate ticket booth, a ceiling and trim made of red oak, French tile floors, stained glass windows, and a large terra cotta fireplace. The only alteration of the original space is the addition of an interior balcony.

All content from Kiddle encyclopedia articles (including the article images and facts) can be freely used under Attribution-ShareAlike license, unless stated otherwise. Cite this article:
Ann Arbor station (Michigan Central Railroad) Facts for Kids. Kiddle Encyclopedia.