Fedorova was born in Kiev, Ukrainian SSR. Both her mother, Tatiana Abayeva, and father, Boris Fedorov, were concert musicians, scholars, and teachers. From the time she was two years old, she had always wanted to become a pianist. She began playing at the age of five. She gave her first public recital when she was six, and she gave her national debut at the age of seven, at the National Philharmonic Society of Ukraine.

Regarding her early childhood, Fedorova has said that, with both parents being professional pianists, there was always "the sound of the piano in the house". Her parents gave her lessons, and she said "they were decisive for my musical development."

In 2008, Fedorova graduated from the Lysenko Musical College for gifted children. As a student, she was the recipient of The President of the Ukraine Scholarship during 2003–2008.

Outside her native Ukraine, Fedorova studied under Leonid Margarius at The International Piano Academy, which is a school of advanced piano performance specialization located in Imola, Italy.

Fedorova also studied at the Royal College of Music in London under Norma Fisher. She was a recipient of the Big Give full tuition scholarship.

She has also received artistic guidance from world-renowned pianists such as Alfred Brendel, Menahem Pressler, and András Schiff.

Fedorova's "international concert career took off while she was only a child".

In 2013, at the age of twenty-three, Anna performed at Concertgebouw in Amsterdam, Netherlands. She played Rachmaninoff's Piano Concerto No 2. Fedorova has performed there more than thirty times.

Fedorova's manager Rob Groen recounted the first time he heard her play. He "reluctantly" heard her play "as part of a group of piano students performing for him in Kiev". The first three were "all very good", but, when he heard Anna, he was "in shock" by her "exceptional talent".

Musical critics have praised Fedorova's signature "sweet modesty and wild expression", which rendered listeners "completely taken by surprise, compelled and astonished". Fedorova says about her playing, "You can really paint with music. You see the colorful, inspiring scenes."

Fedorova has appeared at numerous International Music Festivals and has claimed top prizes in Italy, Greece, Germany, Slovakia, Estonia, and the Czech Republic. Music festivals in which she has appeared include:

Orchestras with which Fedorova has performed

Fedorova has performed with orchestras around the world including: 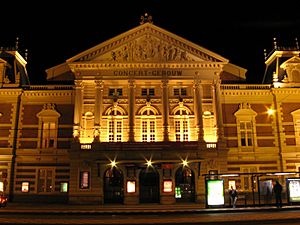 Concertgebouw Amsterdam where Fedorova has performed over 30 times.

Fedorova has given concerts in concert halls across Europe, North America, South America, and Asia. These include:

In September 2013, in the Concertgebouw, Fedorova performed Rachmaninoff's 2nd Piano Concerto to open the season of Sunday Morning Concerts. The recording of this concert has received over twenty-nine million views on YouTube.

Fedorova performed in the Concertgebouw in December 2010 to a full house of 1,974 seats in the Grote Zaal (Main Hall). After her concert, Christo Lelie, a Dutch writer and musician, wrote a review in the Trouw. The story was headlined "Anna Fedorova Deserves a Full House at the Concertgebouw." He explained that at nineteen years of age, Fedorova was "one of the major piano talents of today". Her playing was characterized as "a solid technique, a tone that is powerful but not harsh, impeccable rhythm, and an adept feel for a composition's form". Fedorova's deeply personal performance "touched the hearts of her audience".

In November 2015, Fedorova returned to the Royal Concertgebouw to perform Rachmaninoff's Piano Concerto No 3. This performance was again streamed live on TV, internet and radio.

On June 28, 2009, Anna Fedorova gave a masterpianist recital at the Fuller Lodge Art Center in Los Alamos, New Mexico. On July 11, 2009, her father Boris Fedorov performed in the same venue. As part of the program, his daughter joined him on stage for a piece requiring three pianists, one of whom was Anna. It was the first time that the father and daughter had been on stage together for a major performance.

Conductors with whom Fedorova has performed

Conductors with whom Fedorova has performed include:

Van Zweden said, "performing Beethoven's 5th Piano Concerto with Anna Fedorova" was "a great pleasure for me, the orchestra, and the audience. Anna is a wonderful artist, a great pianist and a very charming charismatic person".

In an interview on December 23, 2014, Fedorova said, "I try to learn everything about the composer." For example, she said that Rachmaninov was depressed when composed his Cello sonata; it was a difficult time for him. So, although "the sonata is full of hope and happiness", one also hears "concern and doubt. The piece also has dark sides." She said, "with this knowledge, I try to penetrate deeper into the core of the music."

Also in 2014, Champs Hill Records released a recording of a recital given by Fedorova and Jamal Aliyev. The CD is titled Russian Masters.

In his review in Fanfare on July 10, 2016, Colin Clarke wrote, "The Chopin Sonata (with exposition repeat) reveals a player of the highest sensitivity... Fedorova has the daring to let bare textures speak for themselves; her rests are always impeccably timed and her approach reminds the listener of the modernity of Chopin's writing." "Brahms seems to enter a whole new world, a fantastical new beginning almost. Fedorova conveys all the exploratory wonder; the end is rapt and magnificent". In the Liszt piece, Fedorova gives "another fine performance". She "seems to enter straight into the world of the composer. Her way with the long tenor/bass melodies expertly tells a story; her filigree is impeccably Lisztian."
In the same issue of Fanfare, Peter J. Rabinowitz had a review. In it he said, "Now just reaching her mid 20s, Ukrainian pianist Anna Fedorova shows herself, on this debut recital, to be a significant pianistic talent." In the Chopin piece, she plays "with a seamless legato, a rich and deep tone, a flexible (even improvisatory) sense of pulse, a sure feel for the emotional weight of the harmonies, and an enviable ability to sustain the phrases, she brings out the long lines in a way that's rare for hotshots of her generation". "She produces instead a polished elegance that helps explain why she did so well in the International Rubinstein In Memoriam competition in Poland in 2009." In the Brahms piece, Fedorova's playing is "even more succulent". "Her treatment of dynamics, especially at the quiet end, draws you in." "This is a distinguished reading—as is her rich and flexible reading of the Liszt Sonnetto."

All content from Kiddle encyclopedia articles (including the article images and facts) can be freely used under Attribution-ShareAlike license, unless stated otherwise. Cite this article:
Anna Fedorova Facts for Kids. Kiddle Encyclopedia.