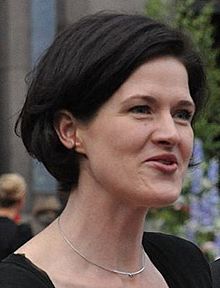 Anna Maria Kinberg Batra (born 14 April 1970) is a Swedish politician. In January 2015, she became the leader of the Moderate Party the main opposition party in Sweden as of 2015.

All content from Kiddle encyclopedia articles (including the article images and facts) can be freely used under Attribution-ShareAlike license, unless stated otherwise. Cite this article:
Anna Kinberg Batra Facts for Kids. Kiddle Encyclopedia.