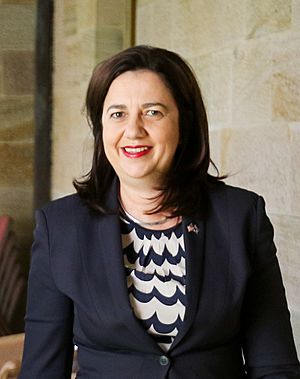 Annastacia Palaszczuk (born 25 July 1969) is an Australian politician. She is the 39th and current Premier of Queensland since February 2015. She is the Leader of the Labor Party in Queensland. She served as a minister in a number of positions in Anna Bligh's government. She is a member of the Parliament of Queensland for Inala since 2006.

Palaszczuk was born in Durack, Brisbane, Queensland. Her father, Henry Palaszczuk, is a veteran Labor MP from Queensland. She has Polish and German ancestry. She is twice divorced.

All content from Kiddle encyclopedia articles (including the article images and facts) can be freely used under Attribution-ShareAlike license, unless stated otherwise. Cite this article:
Annastacia Palaszczuk Facts for Kids. Kiddle Encyclopedia.