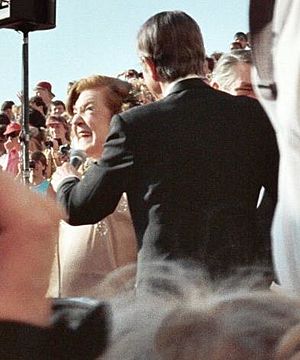 Anne Ramsey (March 27, 1929 – August 11, 1988) was an American stage, television, and movie actress. She is probably most famous for her roles as Mama Fratelli in The Goonies and Momma in Throw Momma from the Train.

Her somewhat slurred speech was caused in part from having had some of her tongue and her jaw removed during surgery for esophageal cancer in 1984. In 1988, her cancer came back, and she died in August at the Motion Picture & Television Country House and Hospital in Woodland Hills, California.

All content from Kiddle encyclopedia articles (including the article images and facts) can be freely used under Attribution-ShareAlike license, unless stated otherwise. Cite this article:
Anne Ramsey Facts for Kids. Kiddle Encyclopedia.