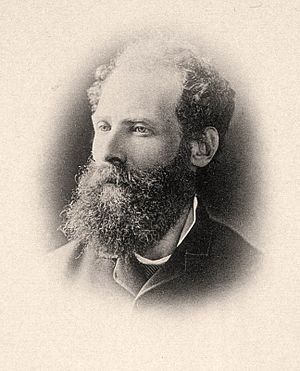 Antero Tarquínio de Quental was born on 18 April 1842 in Ponta Delgada in the islands of Azores. He was a son of Fernando de Quental, a former soldier, and his wife Ana Guilhermina da Maia. He studied at the University of Coimbra and soon became a leader of his fellow students. He protested against the shape of Portuguese poetry of the time. He shot himself on 11 september 1891 in his native town.

During his stay at the university he wrote Raios de Extincta Luz (Rays of Vanishing Light) and Primaveras Românticas (Romantic Springtimes). Antero de Quental's most famous work however is Odes Modernas, published in 1865. He wrote in the first place sonnets. They were translated into English in 1922 by Sylvanus Griswold Morley as Sonnets and poems of Anthero de Quental. He wrote essays, too, for example Bom Senso e Bom Gosto (Good Sense and Good Taste).

All content from Kiddle encyclopedia articles (including the article images and facts) can be freely used under Attribution-ShareAlike license, unless stated otherwise. Cite this article:
Antero de Quental Facts for Kids. Kiddle Encyclopedia.