Anti-nuclear movement in the United States facts for kids 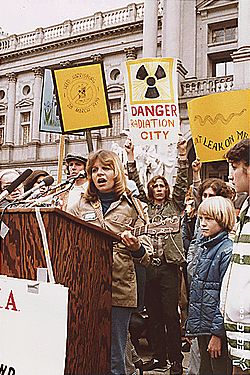 Beginning in the 1980s, many anti-nuclear power activists began shifting their interest, by joining a rapidly growing nuclear freeze movement, and the primary concern about nuclear hazards in the USA changed from the problems of nuclear power plants to the prospects of nuclear war. On June 12, 1982, one million people demonstrated in New York City's Central Park against nuclear weapons and for an end to the cold war arms race. It was the largest anti-nuclear protest and the largest political demonstration in American history. International Day of Nuclear Disarmament protests were held on June 20, 1983 at 50 sites across the United States. There were many Nevada Desert Experience protests and peace camps at the Nevada Test Site during the 1980s and 1990s.

All content from Kiddle encyclopedia articles (including the article images and facts) can be freely used under Attribution-ShareAlike license, unless stated otherwise. Cite this article:
Anti-nuclear movement in the United States Facts for Kids. Kiddle Encyclopedia.