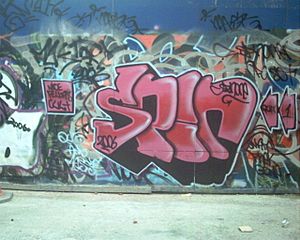 An ASBO, or an Antisocial behaviour order, is a British legal term for an order that is sometimes served on people who often behave badly and have had many complaints made against them because of their behaviour. The order is designed to stop them from being anti-social, which means to causing distress or alarm (among other things) to other people that do not live in the same place as themselves, according to the Crime & Disorder Act. 1998.

Some types of anti-social behaviour are:

An ASBO prohibits people from doing certain things, in certain times, in certain places. For instance, it might ban a person from gathering with certain friends in the park after 8 o'clock if that group of people have previously caused trouble together.

There is also something called an ABC, which stands for an Acceptable Behaviour Contract, and are often used to make sure people try to be "nice". It is flexible, and can be used in serious situations as well as low key ones.

Sometimes the ASBO can seem quite unusual when it is used to stop certain people from doing things, for example:

All content from Kiddle encyclopedia articles (including the article images and facts) can be freely used under Attribution-ShareAlike license, unless stated otherwise. Cite this article:
Anti-social behaviour order Facts for Kids. Kiddle Encyclopedia.