Anton was founded in 1924 near the center of the north pasture of the former Spade Ranch when ranch owner William Leonard Ellwood contracted with the Anton Townsite Company to plat a town at the site of Danforth Switch, a spur of the Pecos and Northern Texas Railway. The town was named in honor of J.F. Anton, a Santa Fe railroad executive.

Anton's first mayor was Paul Grover Whitfield, who was born in July 1908, so in 1924 was only 16 or 17 years old. He told everyone he was 18, so was able to accept the position. He is, therefore, on record as being the youngest mayor ever in Texas at the time, and since he was under 18, the record stands to this day and likely will for all time. Whether an election was held or if he simply volunteered for the position is unclear. In those days, identification was not required because most agreements were done with a handshake.

Anton sits just to the east of the geographic center of the level High Plains of the Llano Estacado. The flat terrain is broken to the west by a dry watercourse called Yellow House Draw, which passes about 0.5 miles (1 km) to the east of Anton.

Anton is well situated with regard to transportation. It is located at the intersection of U.S. Route 84 and Farm to Market Roads 168 and 597. The Burlington Northern Santa Fe Railway passes through the western edge of town. 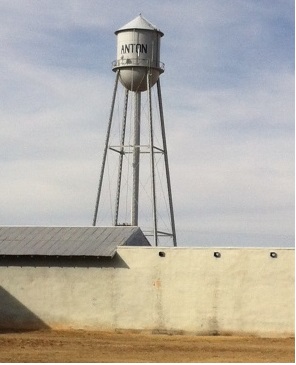 There were 423 households, out of which 39.7% had children under the age of 18 living with them, 61.5% were married couples living together, 9.0% had a female householder with no husband present, and 25.8% were non-families. 23.9% of all households were made up of individuals, and 14.7% had someone living alone who was 65 years of age or older. The average household size was 2.84 and the average family size was 3.40.

Anton is served by the Anton Independent School District and is home to the Anton High School Bulldogs.

All content from Kiddle encyclopedia articles (including the article images and facts) can be freely used under Attribution-ShareAlike license, unless stated otherwise. Cite this article:
Anton, Texas Facts for Kids. Kiddle Encyclopedia.