Kids Encyclopedia Facts
Not to be confused with Ants climbing a tree. 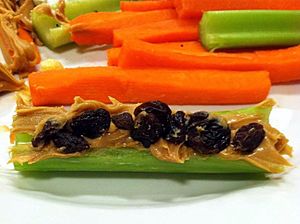 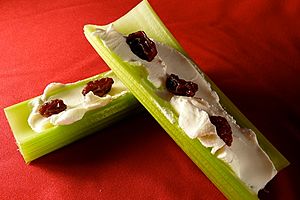 Ants on a log is a snack made by spreading peanut butter, cream cheese, ricotta cheese, or another spread on celery and placing raisins (or, if preferred, chocolate chips) on top. The snack and its name is presumed to date to the 1950s. The classic peanut butter version of ants on a log is recommended as a healthy snack by the McKinley Health Center at the University of Illinois at Urbana-Champaign. The fun name and simple flavors appeal to children (see also: Peanut allergy).

Stuffed celery became a popular snack in the early 1900's after the inclusion of such recipes as Celery with Roquefort in the book Catering for Special Occasions with Menus and Recipes by Fannie Merritt Farmer. Celery was most commonly stuffed with a form of cheese, most popular being cream cheese, and was often topped with capers or olives. The inventor of the peanut butter/raisin combination of the snack is unknown. However, many attribute the popularization of the combination to the Girl Scouts, where the recipe has been featured in several iterations of the Girl Scout Cookbook as far back as 1946, although at that time the recipe was titled "Celery Sticks" and did not include raisins. The first time the "Ants on a Log" snack was mentioned in print was in an article published by the Star Tribune in February 15, 1959 which reads, "Anne Marie is working on snacks. Popcorn, cheese dips, and the other night, ants on a log have been some of the foods the family has shared.”

There are numerous variations of ants on a log, including:

All content from Kiddle encyclopedia articles (including the article images and facts) can be freely used under Attribution-ShareAlike license, unless stated otherwise. Cite this article:
Ants on a log Facts for Kids. Kiddle Encyclopedia.