The Anvil Point Lighthouse is a fully-automated lighthouse located at Durlston Country Park near Swanage in Dorset, England. It is owned by Trinity House and currently operated as two holiday cottages. 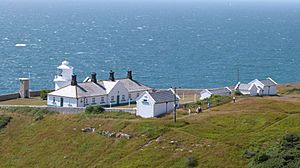 The lighthouse in its compound.

The lighthouse is built of local stone and was completed in 1881. It was opened by Joseph Chamberlain, the President of the Board of Trade. The lighthouse tower is twelve metres tall, the height of the light above the high-water mark is 45 m (148 ft). The light is positioned to give a waypoint for vessels passing along the English Channel coast.

Originally the light was illuminated by a Douglass multi-wick mineral oil burner, set within a large (first order) revolving 14-panel dioptric optic by Chance Brothers & Co. It was the first example of a significant new design of lighthouse optic, whereby (through the use of dense flint glass in the upper and lower portions) the height of a Fresnel lens could be significantly increased, dispensing with the need for additional reflective prisms above and below; the lenses alone stood 6 ft 2 in (1.88 m) high. The lamp was also specially designed for Anvil Point by James Douglass; it was subsequently used in other large coastal lighthouses, a series of international patents having been granted.

An explosive fog signal was established at the lighthouse in February 1894, which in foggy weather sounded once every ten minutes (later altered to every five minutes).

During 1960, the lighthouse was modernised and electrified (with a new lamp, powered by mains electricity, replacing the PVB). At the same time a smaller optic replaced the original lens array, which was removed and donated to the Science Museum. That same year, the five-minute explosive fog signal was replaced by a triple-frequency electric signal, sounded from a stack of thirty tannoy emitters positioned on the seaward edge of the compound directly in front of the lighthouse. In 1981 new automatic equipment was installed, but the fog signal was discontinued in 1988.

Anvil Point Lighthouse was fully automated on 31 May 1991 and is now monitored and controlled from the Trinity House Operations Control Centre at Harwich.

In 2012, a LED lamp was installed above the rotating Fresnel lens to serve as the main light at Anvil Point; its character is, as it was previously, a white flash every 10 seconds. (The old lens, though no longer in use, remains in place in the tower.)

All content from Kiddle encyclopedia articles (including the article images and facts) can be freely used under Attribution-ShareAlike license, unless stated otherwise. Cite this article:
Anvil Point Lighthouse Facts for Kids. Kiddle Encyclopedia.