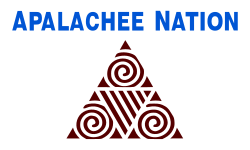 Flag of the Apalachee Nation

The Apalachee were a Native American people who historically lived in the Florida Panhandle.

The Apalachee occupied the site of Velda Mound starting about 1450 CE. They had left the area before the Spanish came in the 17th century. They first saw Spanish explorers in the 16th century. This is when the Hernando de Soto expedition arrived. They lived between the Aucilla River and Ochlockonee River, at the head of Apalachee Bay. This was an area known to Europeans as the Apalachee Province.

The Spaniards had created Catholic missions throughout their province by the early 1600s. The Apalachee were farmers and noted warriors. By 1655 there were eight towns, each with a mission. In addition to the Spanish, each town had an Apalachee population of between 6,000–8000. The British with their Creek allies often raided the Apalachee and Spanish towns. In 1703 a British army and hundreds of Creek warriors attacked the territory. The Apalachee were nearly destroyed. The survivors, who numbered about 1400, dispersed. Over time many Apalachee mixed in with other groups, particularly the Creek Confederacy. Others found protection with the French in what is now Alabama and Louisanna. About 300 descendants in Rapides Parish, Louisiana, claim an Apalachee identity today.

The Apalachee spoke a Muskogean language called Apalachee. The language is now extinct.

All content from Kiddle encyclopedia articles (including the article images and facts) can be freely used under Attribution-ShareAlike license, unless stated otherwise. Cite this article:
Apalachee people Facts for Kids. Kiddle Encyclopedia.