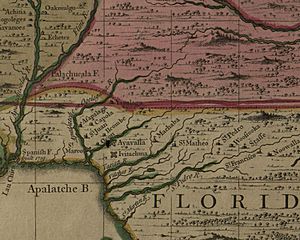 Map detail showing northwestern Florida, including the region of the Spanish Apalachee Province. This area was the scene of the 1704 Apalachee massacre, but does not accurately represent the location of all of the missions affected.

Apalachee Province was the area in the Panhandle of the present-day U.S. state of Florida inhabited by the Native American peoples known as the Apalachee at the time of European contact. The southernmost extent of the Mississippian culture, the Apalachee lived in what is now Leon County, Wakulla County and Jefferson County. The name was in use during the early period of European exploration. During Spanish colonization, the Apalachee Province became one of the four major provinces in the Spanish mission system, the others being the Timucua Province, (between the St. Johns and Suwanee Rivers), the Mocama Province (along the Atlantic coast of what is now northern Florida and southern Georgia) and the Guale Province (along the Georgia coast north of the Altamaha River).

Around 12,000 years ago, bands of indigenous peoples roamed the hilltops and lake shores of what are now Leon County and Jefferson County. They lived by hunting, fishing and gathering. Eventually they became more settled, making stone tools, pottery, and then domesticating plants. By 1000 A.D., the indigenous people developed agriculture and cultivated numerous plants, particularly varieties of maize, as the main staple food. Native Americans lived in scattered villages made up of farmsteads but gradually developed agricultural surpluses that allowed more population density.

Apalachee Province was closely linked by trading and cultural exchange to other Native American cultures throughout the interior Southeast, including the later Southeastern Ceremonial Complex (SECC). As many as 60,000 people lived in 40 towns scattered through the area. Production of surpluses of maize aided in the growth of towns and more complex cultures. The elite organized workers to construct complex earthwork mounds for religious, political and ceremonial purposes.

The historical Apalachee occupied the Velda Mound site from about 1450 CE-1625 CE, although they mostly abandoned the site soon after the beginning of the Spanish Mission Period, c. 1565. After the Spanish began colonization and brought in missions, they called this cultural area the Apalachee Province.

The Apalachee Province was heavily depopulated with Carolina Governor James Moore's raids into the area during Queen Anne's War. Most of the Spanish missions in the province were destroyed during the Apalachee massacre.

All content from Kiddle encyclopedia articles (including the article images and facts) can be freely used under Attribution-ShareAlike license, unless stated otherwise. Cite this article:
Apalachee Province Facts for Kids. Kiddle Encyclopedia.