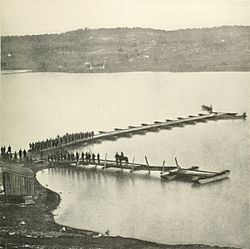 Aquia Creek is a 27.6-mile-long (44.4 km) tributary of the tidal portion of the Potomac River and is located in Northern Virginia. The creek's headwaters lie in southeastern Fauquier County, and it empties into the Potomac at Brent Point in Stafford County, 45 miles (72 km) south of Washington, D.C.

The Public Quarry at Government Island in the creek served as the source for Aquia Creek sandstone. This sandstone was used in numerous public buildings. The most important of these public buildings was the first White House in Washington, DC. It was painted white for symbolic reasons. The National Capitol Columns were also quarried at the Aquia Creek Public Quarry in the early 1800s. They were transported to Washington on a barge.

In an early American Civil War skirmish, the Battle of Aquia Creek, three US gunboats battled a Confederate shore battery. The skirmish took place from May 29, 1861 to June 1, 1861 during the Union campaign to blockade the Chesapeake Bay. There were an estimated 10 casualties.

All content from Kiddle encyclopedia articles (including the article images and facts) can be freely used under Attribution-ShareAlike license, unless stated otherwise. Cite this article:
Aquia Creek Facts for Kids. Kiddle Encyclopedia.